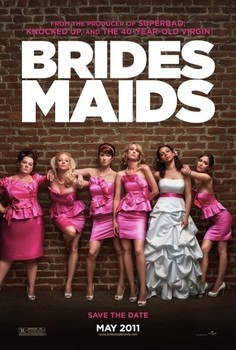 Originally promoted (and likely pitched) as the female version of The Hangover, Bridesmaids is an inventive creation better than the sum of its parts. It’s part chick flick, part ribald comedy, and it features a subplot about how women can be nice to each other’s faces while mercilessly competing with each other. Oh, and it’s extremely funny. Crude, subtle, visual and verbal gags abound, but the biggest surprise of all is that the story comes first.

Annie (Wiig) is unlucky at just about everything: she lost her cake business and boyfriend in one fell swoop, killing the joy she had for anything else. In the current love department, she remains the plaything of crude, disrespectful Ted, played by an uncredited Hamm.

Her best friend Lillian (Rudolph) announces her engagement and asks Annie to be her maid of honor. But Annie ends up competing with Helen (Byrne), the film’s de facto villain. Helen is rich, bored and passive-aggressive: she escalates each pre-wedding event to ludicrous levels of perfection, which only reminds Annie about how poor and unhappy she is.

We meet the others, but the one that sticks is Megan (McCarthy), Lillian’s future sister-in-law. At first glance, she appears to be the female equivalent of The Hangover’s Zack Galifianakis, the wild card of the bunch that has no boundaries and says whatever’s on her mind. But screenwriters Mumolo and Wiig have a trump card: she’s the only character who knows exactly who she is, and asks the question that presents the movie’s theme: who are you, exactly?

Bridesmaids pulls back the ugly curtain to reveal that underneath all that prettiness and perfection is a world filled with simmering self-doubt and self-loathing. To say this film cracks the female code might be going too far, but it offers insights that other movies (Bride Wars, etc.) have missed because they are aiming so low.

The cast is great: it’s lovely to see the luminous Clayburgh one last time (the actress passed away November, 2010). Hamm has a blast playing a world-class pig. O’Dowd is the kind-hearted police officer who strikes up a friendship with Annie. McCarthy steals every scene and gets the most repeatable lines. The poor guy resisting her persistent advances on a flight to Vegas is played by Falcone, McCarthy’s real-life husband.

Rudolph and Wiig are both strong actors with a strong off-screen connection as friends. The combination is incredible. When things gets ugly, the gals bring the unvarnished fury as only great friends can. Wiig, also a co-writer, takes the lead after a string of impressive co-starring roles (Paul, All Good Things, Whip It) and delivers a complete performance, devoid of any comedic tics that Saturday Night Live players usually bring with them to the big screen.

Of course, if you are looking for wildly inappropriate dialogue and humor, that’s here too. An extended sequence that combines a trip to an exclusive bridal boutique with the sudden onslaught of food poisoning is a finely-timed countdown to bodily Armageddon, and it’s as hilarious as it is cringe-worthy.