Rock in a Hard Place

Last weekend, Rock Of Ages arrived with a thud. The spirited jukebox musical, an adaptation of an off Broadway sensation, made a scant $15 million from its 3470 screens. By Monday, the loudest Hollywood pundits were all asking the question: “Can Tom Cruise still open a movie that doesn’t have Mission Impossible in the title?” 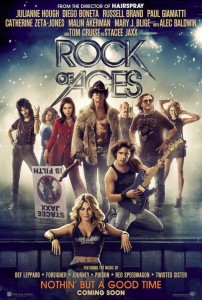 That’s not the question to be asking.

It should be: who the hell decided to release Rock Of Ages on 3400 screens in the heart of the summer movie season? The very data that supports Cruise’s box office slide also provides ample reasons why summer was the wrong time for this film. 74 percent of the audience was over 25, and those in the nostalgia crowd loved it. Turns out the kids could care less about a musical set during the hair band 80s. You don’t say!

Prior to the film’s release, there was much comparing it to Mamma Mia, an execrable film experience that also happened to score a cool half-billion around the world on nostalgia alone. I’m sure there were a lot of conversations within the hallowed halls of Warner Brothers that observed Mamma Mia was released in July, so they should do great. Plus, hey, Tom Cruise’s hot again based on the performance of his latest Mission Impossible sequel.

Apples and oranges. Cruise is a proven action brand, not somebody who packs them in at musicals, of which this was his first.

In all fairness Ages director Adam Shankman also had a 2007 box office hit with Hairspray, itself a genre-specific musical with a past-his-prime action movie star (John Travolta) doing something completely different. It also was released in July.

Full disclosure: I enjoyed Rock Of Ages despite its flaws. But I saw it with a pumped-up crowd ready for a good time. It did not aspire to be high art, no more than the average episode of Glee does. Complaining about its artistic merits is like critiquing a carnival ride. You either like them or you don’t. And although I’m not a fan of musicals, I do enjoy a movie that knows exactly what it is, even though I seriously doubt it will join my Blu-ray collection.

But since we’re stuck Monday morning quarterbacking Rock Of Ages‘ June performance, we have to look beyond whether Cruise can still open a movie.

The movie was marketed horribly. After I saw the film, I went home and watched the trailer. It barely resembled what I had just seen. A wicked Alec Baldwin monologue, meant to cut another character down to size with a biting sarcasm was edited in a way to make it look like an inspirational speech. Despite a weirdness and sexual edginess that had me questioning the PG-13 rating, the previews made it look like the “80s hair band” episode of Glee.

And since we’re comparing the film to Mamma Mia, does anybody remember the poster for that film? It didn’t have Meryl Streep, Pierce Bronson, Colin Firth, or any of the other “old” stars. It had a joyous Amanda Seyfried, and that’s it. There are 100 iconic images that could have served as the poster for Ages, or at the very least, sold it to young people, if that’s what Warner Brothers really wanted. But clearly, they didn’t know what they wanted.

Sorry, but when you’re spending $75 million on a very specific genre, with limited demographic appeal, the last thing you want to do is to promote a movie with a scattershot approach that emphasizes all that’s weak about it.

The most casual film-goer knows that summer movies are for the kids, and winter movies are for the grown-ups: that’s when studios release prestige Oscar releases and more sophisticated fare. Movies also have longer legs in the winter because the “over 24” crowd doesn’t rush right out for opening weekend.

The Sherlock Holmes sequel opened with a 39.6 million and went on to score $186 million. Cruise’s Mission Impossible: Ghost Protocol opened with $13m on its way to a whopping $209m. I’m not saying that Rock of Ages would have matched that if released in the winter, but it certainly wouldn’t have been dead in its second weekend.

Since we’re talking about Cruise, most critics and audiences agree that his grizzled rock god performance was not only the best thing about the film, but one of the best things he’s ever done. Alas, people don’t get Oscar nominations in the winter when their summer movie has the stink of flop all over it.

I’m really not defending the merits of the film. If you were primed to enjoy it, you probably did. If you are averse to the charms of musicals, Russell Brand, and Bon Jovi, there’s nothing to see here.

But I am questioning Warner Bros.’ long-term game plan in the face of overwhelming demographic proof that, Mamma Mia and Hairspray notwithstanding, time-specific period films, especially those based on Broadway plays, do better critically and commercially when released in December.

According to Box Office Mojo, an article dated March 23, 2011 announces Rock Of Ages for June 2012. Discounting the fact that WB had 15 months to figure out how to market the thing, what’s interesting is that Judd Apatow’s next comedy and Bryan Singer’s Jack the Giant Killer were also scheduled for the same month but rescheduled. Maybe for the same reasons Rock should have rolled?

Lumped into the Rock Of Ages postmortem was the observation that Adam Sandler’s latest film That’s My Boy underperformed, threatening Sandler’s status as a hitmaker. After a decade of lazy, self indulgent, increasingly-expensive vanity projects so that Sandler can work with all his friends without breaking a sweat, well that’s just common sense kicking in.

Sandler has become the kind of actor he parodied in Apatow’s Funny People (2009). You can only serve shit on a shingle for so long before people start to notice the smell.

Dennis Willis hosts the Flick Nation Radio show, a weekly 1-hour look at the entertainment industry from the inside out. He also hosts the weekly syndicated feature Flick Nation: Home Media Guide, and is the Afternoon News film critic on KGO Radio in San Francisco. He is the author of American Popcorn: Hollywood and the War on Common Sense and the Flick Nation Movie Guides.