If you’d like to attend this FREE SCREENING on Monday, March 4th at the Embarcadero Cinemas in San Francisco, you must do the following:

1. DOWNLOAD THE TICKET HERE. Print the ticket and bring it with you.

2. RSVP VIA EMAIL HERE. Your name (and the names of all of your closest friends) will be on the VIP list! 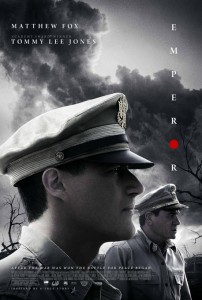 A gripping tale of love and honor forged between fierce enemies of war, EMPEROR unfolds the story, inspired by true events, of the bold and secret moves that won the peace in the shadows of postwar Japan. The story of EMPEROR is based on the resonant, real events of 1945, when General MacArthur took control of a shell-shocked Japan on behalf of the U.S and Bonner Fellers worked covertly to investigate the Emperor’s fate while the future of the nation hung in the balance. Entwined with an against-the-odds romance, the story traverses the conflicting loyalties between heart and homeland, between revenge and justice, as the world rebuilds from the ruins of war.

Matthew Fox joins with Academy Award® winner Tommy Lee Jones, newcomer Eriko Hatsune and award-winning Japanese star Toshiyuki Nishida to bring to life the American occupation of Japan in the perilous and unpredictable days just after Emperor Hirohito’s World War II surrender. As General Douglas MacArthur (Jones) suddenly finds himself the de facto ruler of a foreign nation, he assigns an expert in Japanese culture – and psychological warfare – General Bonner Fellers (Fox), to covertly investigate the looming question hanging over the country: should the Japanese Emperor, worshiped by his people but accused of war crimes, be punished or saved? Caught between the high-wire political intrigue of his urgent mission and his own impassioned search for the mysterious school teacher (Hatsune) who first drew him to Japan, Fellers can be certain only that the tricky subterfuge about to play out will forever change the history of two nations and his heart.