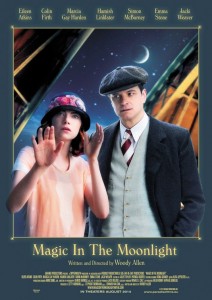 Ever since his 1978 O. Henry Award winning short story The Kugelmass Episode, Woody Allen has been playing with magic in his writing and films. In that groundbreaking work, an Allen-esque college professor named Sidney Kugelmass—unhappy in his marriage and in the midst of a raging mid-life crisis—seeks the help of a shady magician named “Persky the Great,” who proceeds to put Kugelmass into a magic box and transport him directly into the plot of Flaubert’s Madame Bovary. This highly-respected piece (now included in the Norton Anthology for Literature) represented Woody at his very best, operating in a comedic genre of his own design, where magical realism meets humor and irony head on and succeeds without diluting either focus; the side-splitting jokes existing in perfect service to the hefty philosophical concerns.

Allen never made The Kugelmass Episode into a film per se, yet he has been mining its thematic territory for years. This approach has produced some of his most incisive and effective work (Zelig; Purple Rose of Cairo; Midnight in Paris), wherein the magic/supernatural elements offered the opportunity for unique perspective and sharp existential debate. It has also been the narrative catalyst for some of his most poorly-realized films (Scoop; Curse of the Jade Scorpion; You Will Meet a Tall, Dark Stranger), where the magic/hypnotism/clairvoyance etc. seemed merely a device to provide a central conundrum to the plot and an avenue for Allen’s scene-saving one-liners.

Magic in the Moonlight, Allen’s latest offering, enters wonderfully into the winning category, standing solidly as one of his most life-affirming and hopeful, if not one of his top-tier, films. Because here, Magic is not the MacGuffin—it is the subject, the very thing the movie is about—and this slyly produces unexpected  philosophic dilemmas that surprise the characters in the film as much as the viewers in the theatre.

The story centers on Stanley Crawford (Colin Firth), a world-famous magician who is out to debunk the psychic powers of a medium named Sophie Baker (Emma Stone), a young American visiting the South of France at the behest of a wealthy matriarch desiring communication with her deceased husband. Stanley attends the requisite séance determined to expose Sophie as a fraud, but finds himself increasingly convinced that she may indeed possess the ability to read minds and communicate with the dead. In short, Stanley emerges from his contact with Sophie with his skeptical world-view shaken to its core.

Stanley Crawford is one of Allen’s juiciest creations, and Firth plays him with smug, bitter relish, not so much chewing scenery as reveling in the character’s existential dysfunction. Crawford is a staunch, condescending rationalist who has placed himself at the center of what he is certain is a godless universe, and is now forced to consider the reality of an afterlife. The implications of this are compounded further by his job as a “career atheist” of sorts, his egotistical attachment to the superiority of his own intellect, and of course the irony that he, as a magician, peddles the illusion of the supernatural for a living while detesting his audience for their gullibility. With this crisis of “non-faith,” Stanley is vulnerable to nearly every conceivable emotion, and Firth races through the film ringing every bell and hitting every note. He hasn’t been this affecting since The King’s Speech or this funny since Bridget Jones’ Diary.

Firth’s immensely entertaining performance somewhat overpowers Stone’s unassuming Sophie. One of my few quibbles with the film is the feeling that this character, and/or Stone’s performance, was somewhat slight. To be sure, the film doesn’t allow her the showiness of Firth’s unhinged desperation, but neither does Stone the actress really develop the Sophie character into her conceivable potential. Still, her pluck and charisma are more than enough to keep the ball rolling, and this, along with well-timed, solid support from veteran character actors Jackie Weaver, Marcia Gay Harden, Simon McBurney, and scene-stealer Dame Eileen Atkins, allows Firth the freedom to go all the way in an unforgettable role.

This movie comes as a bit of a surprise, given Allen’s spotty consistency since his heyday in the 70s and 80s. Though we have seen a notable resurgence of quality work from him since he decided, in 2005, to film in cities other than New York, anyone paying close attention will likely agree that, over the past ten years, for every intriguing Match Point or Vicky Christina Barcelona there has been a sluggish Cassandra’s Dream or Whatever Works. Given that Allen was following the impressive Blue Jasmine here, my expectations were not high… especially when I discovered that Magic in the Moonlight was revisiting a maybe-now-all-too-familiar supernatural trope. Been there, done that.

In sum, I expected tired and worn hokum; what I got was some extremely deft sleight-of-hand from Woody Allen the filmmaker. Magic in the Moonlight simply delights in upending the viewer’s expectations, and, considering the film’s weighty subject matter, its kind-hearted and deeply satisfying conclusion is clearly the work of a master magician. From its characters to its screenplay to its very essence as a Woody Allen film—this movie, like a great magic act, shows you only what it wants you to see, while concealing its real machinations and motives. It appears conventional on the surface, and yet, as the veils drop, ultimately reveals itself to be about much more than anyone could have anticipated. Magic in the Moonlight may not solve the question of whether God exists, but it sure does leave you feeling that life is magical anyway.