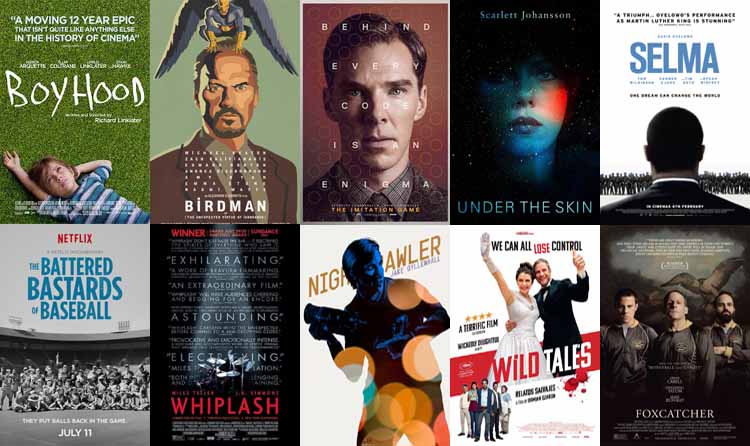 Before we gaze into the crystal ball of films-recently-past and honor the best of 2014, I want to admit that one of the best times I had at the movies all year was watching It’s a Wonderful Life on television the other night. It had been at least 20 years since I last saw it, and I spent the entire three hours (including commercials) blubbering like a boohoo–completely immersed in the plight of George Bailey—as I was once again reminded just how precious and important and, well, deeply moving our simple lives—and the films about them—can be.

To say they don’t make ‘em like that anymore is a worn cliché, but it’s true—and that is just how it should be. The art of film, like life itself, is a constant-flux proposition, an always-evolving, wither-if-not-watered kinda deal. The classic films of the golden age were in the business of defining genres—they created the grand structures of cinematic narrative. The auteurs of today understand this language implicitly, and see genre as yet another element to be stretched, manipulated, mashed, and often left behind completely in their quest to create unique and timely art. The best films of this past year really moved the dial forward, most by completely redefining their approach to genre.

Richard Linklater’s Boyhood, my number one film of 2014, took the coming-of-age genre to its perhaps ultimate—but nearly impossible to manifest–conclusion: showing the actual aging process, for real, over years and years, of a cast of characters in a fictional story. Linklater’s achievement, and that of his stellar cast (Patricia Arquette, Ethan Hawke, and newcomer Ellar Coltrane), is nothing short of a cinematic miracle. The fact that the film itself is so sublime, intuitive, honest, and truthful transformed the already successful genre experiment into high art of the first order.

Likewise, Birdman, Under the Skin, Whiplash, Nightcrawler, and Foxcatcher all bent their core genres to the point where they were nearly unrecognizable forms. Birdman is a collision of black comedy and stark magical realism sucked into the existential abyss, the end result a film that is as indescribable as it is exhilarating. Under the Skin brought a terrifying realism to its science fiction underpinnings, creating an otherworldly dimension that hasn’t felt this new, or inexplicable, since Kubrick’s 2001: A Space Odyssey.

Whiplash whipped the “teacher/student,” “cat & mouse,” and “music as metaphor” sub-genres into a frenzied wail of percussive pain, while Nightcrawler infused the media satire with true crime thriller tensions, exploring ethical dilemmas we are still discovering in the digital age. And, perhaps the slyest of the bunch, Foxcatcher (being true to its title) presented a frightening gothic horror story that looked nothing of the sort; with a monster we’ve never seen before—the massive inequality of wealth and privilege in modern day America—that drives men to insanity and murder.

2014 also gave us a healthy dose of blue-chip historical drama: Selma, The Imitation Game, and The Theory of Everything (which just barely missed my list) told impeccable and heartrending stories of massively influential figures whose bravery and brains truly changed the world for the better.

There were many stellar documentaries in 2014, and three are on my list: The Battered Bastards of Baseball, Glen Campbell: I’ll Be Me, and Life Itself explore the transcendent qualities of baseball, music, and film, respectfully, against a backdrop of struggle, tragedy, and ultimately, the life-affirming personal philosophy of their subjects.

And then there is Wild Tales, which you just have to see for yourself. Prepare for e very bumpy ride!

In short, there are still ever-emergent celluloid waves to surf, and 2014 was a maverick. Let’s hang ten:

Honorable Mention: Tie between Glen Campbell: I’ll Be Me and Life Itself.

And, as we look forward to the cinematic adventures of 2015, I want to begin with a recommendation that is pretty close to home for all of us in the Bay Area, and for me in particular. My long-time Flick Nation colleague Dennis Willis is co-writer and editor (excellent job, my man!) of Changing Boundaries: The History of San Jose, an expansive documentary that tells the stories of the working people, political leaders, and dreamers who built the city of San Jose. The film is narrated by well known actor/storyteller Peter Coyote, and features interviews with key historical figures, revealing the dramatic—and often absurd—journey from its humble, and often rowdy, beginnings to its current status as the mulch-cultural heart of Silicon Valley.

Changing Boundaries premieres at the California Theater in San Jose on January 22nd. I will see you there!