The Wrecking Crew: The Sonic Building Blocks of the Wall of Sound

Home » Article » The Wrecking Crew: The Sonic Building Blocks of the Wall of Sound

As I am clearly a passionate music guy (just talk to me for 30 seconds and it becomes obvious), I am frequently asked who my favorite band is. As the Beatles would be my somewhat clichéd but true answer, I often confound by answering, “The Wrecking Crew.” After I get that long stare, as they try to determine if they are forgetting some underground punk band or the early name of someone like The Velvet Underground, I let them off the hook and explain who the Crew were,

but not before suggesting that they are also the favorite band of millions who have also never heard their name. Because everyone knows their music, and I guarantee you do as well.

The Wrecking Crew is a loose moniker describing a group of approximately two-dozen “first call” studio musicians in Los Angeles in the 1960s and early 1970s. They began as Phil Spector’s legendary “Wall of Sound” ensemble, eventually playing on hundreds of hit songs for many of the biggest stars of the era, such as: the Beach Boys, the Byrds, the Righteous Brothers, the Tijuana Brass, Nancy Sinatra, Ricky Nelson, Johnny Rivers, the Monkees, the Association, the Mamas and the Papas, Sonny & Cher, the 5th Dimension, the Carpenters, and Simon & Garfunkel. They were also frequently used by Bing Crosby, Frank Sinatra, Nat “King” Cole, Dean Martin, and Elvis Presley.

Their roots were in Big Band and Swing, and by the late 50’s they were gigging in jazz combos around LA, playing on sessions for film scores and novelty hits, and backing popular vocalists on the road. In the early 60’s they jelled as a unit through their work with Spector, and quickly became the preferred players for dozens of top producers, songwriters, and record labels. They became a veritable hit factory, a group of virtuoso musicians who could capture any groove at will, prop up any instrumentally-challenged band or teen sensation, and, if the song had potential, hit it out of the park every time. Celebrated songwriter Jimmy Webb (“By the Time I Get to Phoenix,” “Up, Up, and Away,” “MacArthur Park”) described the Crew as the “stone-cold rock & roll professionals.” 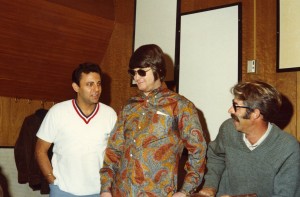 Many might concur that the artistic peak of the Crew’s output occurred in 1966-67, specifically with their work on the Beach Boys’ groundbreaking Pet Sounds and the (until recently) unreleased SMiLE albums—the sessions of which produced the psychedelic pocket symphony “Good Vibrations,” a global smash and still one of the most innovative recordings in history. Brian Wilson was by this time only using the other Beach Boys for vocals; his sonic vision had expanded to the point where he was not only booking dates at separate studios for their unique ambience and production qualities, he was incorporating the specific techniques and flavors of the Wrecking Crew players into the compositions of the songs themselves. He was playing the Crew like a multifaceted instrument capable of mimicking any style or genre.

Several members of the Crew went on to huge success as solo artists. Glen Campbell, after countless recording sessions as part of the Crew, became one of the biggest stars of the late 60s and 70s. The moving documentary, Glen Campbell: I’ll Be Me, which explores Campbell’s struggle with Alzheimer’s disease while on his final concert tour, ends with him recording one last song with his old Crew-mates, at a time when he no longer recognized them. It is a poignant and heart breaking moment. The track they cut together, “I’m Not Going to Miss You,” was nominated for Best Song at the 2015 Academy Awards.

As well, Leon Russell, piano-master for the Crew, found noteworthy success as a solo artist and became quite recognizable as a solo-Beatle sideman (Concert for Bangladesh), while drummer Jim Gordon went on to become a member of Eric Clapton’s highly respected band Derek and the Dominoes, for whom he composed the piano coda for the classic “Layla.”

The other stalwart members of the Crew—drummers Hal Blaine and Earl Palmer; bassists Carol Kaye, Ray Pohlman, and Joe Osborne; keyboardists Larry Knechtel, Mike Melvoin, and Don Randi; guitarists James Burton, Barney Kessel, Al Casey, and Billy Strange; and sax players Plas Johnson, Steve Douglas, and Jim Horn—are not so well known outside of the industry, but that looks to finally change with the release of the long-awaited documentary The Wrecking Crew, coming to theaters March 2015.

The film is the product of a nearly twenty year labor of love. Director Denny Tedseco began shooting the movie in 1996 when his father, “first-chair” Crew guitarist Tommy Tedesco, was diagnosed with cancer. The senior Tedesco’s guitar work is ubiquitous in American culture. In addition to playing on many of the classic pop hits of the era, his guitar work can be heard on more than 1,000 television themes and film/TV soundtracks, including Batman, Green Acres, Mission Impossible, and Three’s Company.

Denny Tedseco has crafted a moving and extremely informative film that chronicles the history of the Crew, with commentary by many of the artists they supported (Brian Wilson, Cher, Mickey Dolenz), and of course memories provided by the surviving members themselves. On the heels of recent successful music docs in the same vein—Standing in the Shadows of Motown, 20 Feet from Stardom, and Muscle Shoals—The Wrecking Crew looks to set the record straight with one of the most incredible and interesting narratives of the classic rock era. For any true music lover, this is not one to miss.

I’ll close with an easy joke, guaranteed to score points next time you are with your music-fan-pals: What do “You’ve Lost That Loving Feeling,” “God Only Knows,” “Strangers in the Night,” “Mr. Tambourine Man,” “These Boots are Made for Walkin’,” “California Dreaming,” “I’m a Believer,” “The Beat Goes On,” “Wichita Lineman,” “Age of Aquarius: Let the Sun Shine In,” “(They Long to Be) Close to You,” and “Bridge Over Troubled Water” all have in common?

I think we all know the punch-line to that one by now.

Here is a wonderful conversation I had with Director Denny Tedesco discussing his new documentary The Wrecking Crew, available in theaters, On Demand, and on iTunes March 13.