Buoyed by the success stories of The Hunger Games, and (gasp) the Twilight series, studios have been falling over themselves trying to find the Next Big Thing with a built-in audience.

The formula: cast a bunch of good-looking inexpensive up-and-coming actors exactly as the characters are described in print, shoot the bare bones of the book, don’t risk anything, and watch audiences break the bank to make each one bigger than the last. They are akin to $100 million audio books, constructed for the devoted, existing primarily to extend the life of the brand. 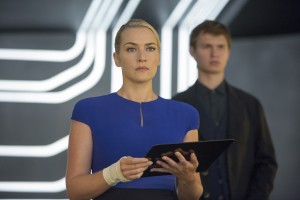 Although, with Insurgent, the wheels are coming off this particular wagon earlier than expected. The Divergent Series is a literary trilogy that once again leans on the old trope of The Chosen One.

If you managed to make any sense of Divergent (2014), you might have come away with the idea that 200 years in the future, what remains of society has been broken down into five  factions – Abnegation for the selfless, Amity for the peaceful, Candor for the honest, Dauntless for the brave, and Erudite for the intelligent – all controlled by an evil Kate Winslet.

Shailene Woodley is Tris, a “Divergent,” which means that she possesses the abilities of all five. Or something like that. Either way, Winslet considers Divergents to be dangerous, which means that our heroine is in deep doodoo.

The first film set up the mythology and paid it off with a big climactic battle royale that could have very well been a satisfying capper if there was only to be one film. But in this episode, our heroes find themselves hiding out until such time they will all face the evil Winslet one more time. The MacGuffin is a mysterious box that has something to do with human history, and as it turns out, only a Divergent can decode it.

I’ve heard more people complain about Veronica Roth’s book series than praise it, so I can only imagine that readers will watch this lazy chapter out of obligation. They will find few surprises – although my movie date informed me there were some key differences in certain outcomes and character fates.

The action sequences aren’t numbing in a Transformers sort of way, but they also carry no human urgency. People run and shoot each other, mostly from dizzying heights, but it’s all empty calories, hollow in the way that generic straight-to-cable flicks handle action. 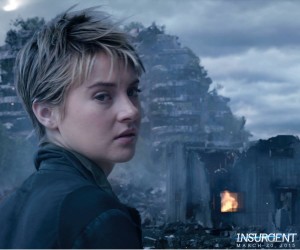 Because it’s action, not because it’s related to character in any way.

There is no believable heft to anything that happens, and that’s saying a lot considering Tris is filled with rage at the situations that resulted in the death of her beloved mother (Ashley Judd).

I found myself more intrigued by Woodley’s ever-changing punky hairstyle (sometimes within the same scene), bad visual effects (obscured for the time being by dotty 3D), leaden voice dubbing, and shifting tattoos far more than anything the characters had going on.

Shailene Woodley is a fine actress. She was absolutely revelatory in the George Clooney drama The Descendants, and bared her soul (and a lot more) in Gregg Araki’s disturbing drama White Bird in a Blizzard. But unfortunately, she is grossly miscast in the role of Tris. The fact that she is able to effortlessly portray an everyday sullen teenager is exactly what works against her.

Jennifer Lawrence is allowed an urgency in The Hunger Games that is sorely needed here. When Woodley proclaims her desire to kill Winslet’s character, she might as well be complaining that her mother won’t let her stay out after midnight. Pro tip: your movie may have a hard time making people hiss when your villain is named “Jeanine.”

Never before has such a good-looking group of blank stares been given the reins to such an expensive franchise. With the exception of Winslet, who fully grasps exactly what kind of cartoony bitch she is playing, and does so with relish, everybody else pouts and glowers through the turgid, melodramatic dialogue while 3D FX whiz about, amounting to a whole lot of visual distractions. The actors gaze upon vast CG vistas with the awe and wonder of ordering a burrito.

Insurgent lumps along from one FX-laden sequence to the next, without so much as a single visceral thrill. The first movie had a great sequence that created genuine suspense about jumping off a train through a hole in the top of a building without knowing who or what would catch them. I remember that scene more than anything here. If a movie can’t be bothered to make me give a shit about any of its characters, then at least dazzle me once or twice with eye-candy.

Even worse, this is the second installment out of three (four if you count the fact that the next book is being carved into two movies), and the optimistic note the movie ends on is one of finality. The threat has been vanquished, the secrets revealed, and freedom has been restored. There isn’t the slightest suggestion that there’s trouble beyond the inspiring choir that swells as our characters are (literally) running toward a more prosperous future.

So, yes. Insurgent fails at its most basic goal – making us want to buy a ticket for the third one.