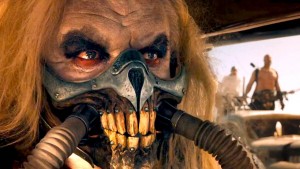 In the world of Mad Max, History just became Herstory. George Miller’s brilliant Mad Max Fury Road again posits the future of our survival, but this time, unlike the first three films, our best shot at redemption comes in the form of a fierce female warrior, who grabs the wheel from Max and drives off with his hero narrative in tow.

True to the series, we’re in a dystopian future, a wasteland, where water (now more than fuel) has become frighteningly scarce, and what is left of it is horded by a maniacal dictator named Imortan Joe. Furiosa, a high-ranking officer in Joe’s militia, defects while on a gasoline hunt in her armed-to-the-grill “War Rig,” and Joe quickly determines that she is not simply running away—she has indeed stolen his most prized possessions: the “Five Wives,” a group of stunning young women chosen by Joe to be his “breeders,” each the victim of his rape and enslavement. Furiosa’s goal: To evade Joe’s army and deliver the girls to the “green place of many mothers,” a desert-oasis she recalls from her childhood.

The character of Imperator Furiosa, not Max, is the protagonist, until finally Max comes to realize her importance and joins her cause. Fearlessly portrayed by Charlize Theron, Furiosa is a woman with purpose, and it doesn’t have anything to do with men, unless they are unfortunate enough to get in her way.

While Furiosa has taken charge of her destiny, Max is literally being driven (this is a Mad Max movie, after all) by forces he cannot control. For a third of the film he is shackled and chained to the front of a truck that is racing through one harrowing, life-threatening situation after the next, his face muzzled by an iron mask that would make Hannibal Lecter envious. Max is a prisoner without hope, a victim like everyone else until he makes a partner of Furiosa instead of an enemy. Her story shapes his story. Their partnership leads to his freedom. In the end, his bravery and sacrifice in her honor is what makes him a true hero.

Fury Road is highly-symbolic, telling its story through archetypal imagery amidst relentless action. While nearly bereft of dialog or exposition, the tale it tells is timeless. This is the realm of the mythical goddess, and though her story is as ancient as the ground we walk on, she has been long overlooked in western culture. Fury Road is the right film for our time, with the right message for our men. It is high-time we embrace this powerful and crucial archetype. 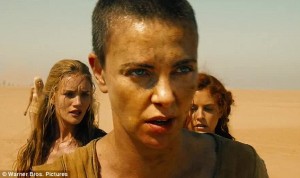 Historically, the Goddess has always been three-parted, expressed by the Maiden, Mother, and Crone. The Maiden is the beautiful young woman, past childhood, but not yet sullied by the evils of the world. The Mother is the mature nurturer, the teacher, and the strong protector. The Crone is the wise-woman, no longer a sexual being able to procreate, but privy to secrets, sagacity, and magic. Fury Road brings them all to the fore: the aforementioned Five Wives represent the Maidens, while the Vulvalini—the Matriarchs who guard the sought-after “green place” —represent the Crones. Furiosa is, of course, the Mother, protecting the child, protecting the soil, protecting life itself. Given the nature of her mission, she has more in common with the Greek Athena and the Norse Freyja than with modern female action icons like Alien’s Ripley and Terminator’s Sarah Connor.

Tom Hardy, in what will be the breakout role of his already impressive career, is pitch-perfect as Mad Max Rockatansky. He is both believably bad-ass and lost little boy (think Ringo with muscles and tats), rugged as a red-rock landscape and yet (according to my gal pals) just dreamy, like Mel used to be. 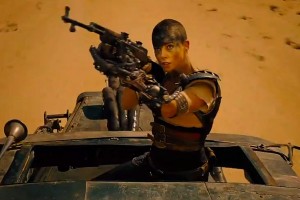 And then there’s Charlize…good golly, Miss Molly…I have always loved her work, but her performance as Furiosa knocked the wind out of me. She is ferocious yet kind, vulnerable but strong. She is made to look androgynous, with her cropped cut and desert leathers, yet she has the face of an angel (it’s true and you know it!); even dripping with grease and caked with dirt, her beauty is inescapable. Who but Theron—with her classic face, serious acting chops, and natural athleticism—could bring all of these elements together? With this role, she not only joins the ranks of Weaver and Hamilton as one of the great female action heroes on the screen, she crafts the most fully realized mythic heroine I’ve seen on celluloid.

To my mind, Fury Road makes the first three movies look rather naïve in comparison. Mad Max 2: Road Warrior was the big leap forward, and became a template for future action films, the great-grandfather to Fast and Furious and similar adrenaline-pumping ilk. At the time, 1981, it was a dazzling technical achievement and a timely parable. Now, in light of Fury Road, it seems a fairly pedestrian heroic tale with a somewhat limited world-view.

The first three films were primarily concerned with fuel/energy scarcity, our major fear at the time of their release. We had just experienced the gas crisis of the late-70s, and were waking up to the fact that we might run out of this stuff. We weren’t worried about water yet…but now we are (as a Californian, I must say this has been on my mind a bit). While we are not yet out of fuel, the Bush Oil Wars are proof that these films were prescient commentary as well as exhilarating entertainment. With Fury Road, director George Miller is starting to look more like George Orwell than George Lucas.

To put it another way, this is what you would get if John Ford directed Ben Hur at Burning Man while tripping on a post-apocalyptic mix of lizard carcass, peyote, and rocket fuel, from a script co-written by Joseph Campbell and Rob Zombie. It is a beautiful and important, if senses-bruising, thing. Mad Max: Fury Road is high art staring down the shadow of our potential future, and asserting the light of the divine feminine to guide us through the ordeal.