Earlier this summer, Carl’s Jr., venerable fast-food challenge eaters, added the “Most American Thick Burger” to their menu. If you haven’t seen the latest bird flip to America’s obesity problem, you should check it out. It’s a fully loaded cheeseburger but with a twist; it has a halved hot dog atop the steamy processed cheese and factory farmed beef because, it’s a “Most American” burger and apparently we are all into that sort of thing. Not to be outdone Wendy’s, that gritty little sister fast food joint that we always forget is still around, added “Baconator Fries” to their menu (fries…with bacon) and don’t even get me started on those mad diabetic scientists at Jack in the Box who, last I checked, started adding butter pats on their burgers.

There’s a first act scene in “Jurassic World,” Colin Trevorrow’s attempt to reboot the stale Jurassic Park franchise, in which computer nerd and dinosaur enthusiast Lowery (Jake Johnson) makes a pretty on-the-nose speech about his affinity for the original theme park (and thus, not so subtly, the original film) wherein, and I’m paraphrasing, “just having DINOSAURS was enough for people.” He continues by saying and again, I’m paraphrasing, that nowadays just having something totally awesome isn’t enough for people. These new dinosaurs have to be bigger, better, badder, totally WAY more awesome! And thus Trevorrow and Company are laying out the rest of the film for us by saying (and I’m speaking kind of allegorically) “Look, this isn’t going to be a very good film. But it’s summer and we all know you just want to turn off your brain and see some big ole dinosaurs attack not only innocent tourists, but also bad guys who are merely bad in the sense that we’ve lightly painted them with some morally grey areas that you really need not worry about because you will have your wish fulfilled in that they will be eaten. And probably in a really nasty way.” Is this an okay way to make a movie? I dunno. I didn’t really like it but I also am in no hurry to try KFC’s new Monstrosity Bowl either.

I don’t mean to be a snob and to be fair, Jurassic World has some pretty nice set-pieces. I’m also heavily rooting for Trevorrow who’s 2012 feature debut Safety Not Guaranteed was one of my very favorite films of that year. I’m glad the guy got a shot at the big time and with a franchise that’s been circling the drain since the first one. And having now seen the film, it’s very clear the guy can direct. But I think there’s a few glaring issues in Jurassic World that stem from a bad screenplay, rich with bad, half-baked ideas and more than likely, a studio hack-job on the final edit. I also could have done without Trevorrow’s homages or cut-rate rip offs of Jurassic Park mastermind and purse string holder, Steven Spielberg, namely the hat tips to Jaws and a hackneyed storyline about divorce. 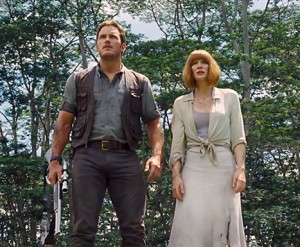 In case you haven’t seen the trailers or film, a little backstory. Jurassic World is the latest misguided attempt by greedy money grubbers to make a theme park where visitors can see real live dinosaurs up close and personal. Aside from the fact that it’s super cool, there’s simply no logical reason these parks are still around, even in fantasy movie world. Like the horror film character who always goes where everyone knows they shouldn’t, the money people in the Jurassic Park theme park world simply do not get the hint that it’s a bad idea to create dinosaurs. But if they don’t, how else would Universal have the top grossing film of the summer so far?

Logic aside, this latest iteration of what always amounts to a Dino-salad bar is “Jurassic World,” a glorious theme park with some brilliantly cloned dinosaurs that aren’t “just” dinosaurs. See, scientists hard at work on keeping the park in the black have been playing God with the newer dino attractions and splicing in DNA from creatures that apparently not only look weird and/or cool but also help these bastard creations survive all the complications messing with DNA provides. Plus, when there’s a new dino to check out, park attendance skyrockets so right on schedule we’re introduced to the most terrifying killing machine ever created, Indominus Rex. 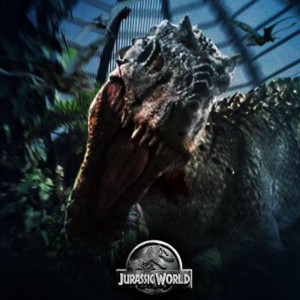 The Indominus’ gene traits are a tightly kept secret, even from the park’s main investor, a Mr. Masrani (Irrfan Khan) as well as from snitty careerist Claire (Bryce Dallas Howard) who is in charge of the entire park. She’s also in charge of her nephews Zach (Nick Robinson) and Gray (Ty Simpkins) who she hasn’t seen in close to a decade but whose divorcing parents Karen and Scott (Judy Greer, Andy Buckley) seem to think it’s a good idea to ship them away for a few days to a theme park with a track record that’s spotty, to say the least. What could go wrong!?

Once we get the basic character set-up, there’s only the hero left and it’s then we meet former Navy bro Owen (Chris Pratt) whose Naval training has somehow made him into some kind of Dino-Whisperer and we see him training a small pack of Velociraptors to obey his commands. He does this the old-school Pavlovian way, with a clicky noise-maker and treats for those who obey. Yes, the once terrifying Velociraptor, the original killing machine of the Jurassic Park movies, has been downgraded to simpering lap dog. Why this has happened is completely unclear until Hoskins (played by National treasure Vincent D’Onofrio), a greedy military contractor explains the raptors are being trained for use in military operations. 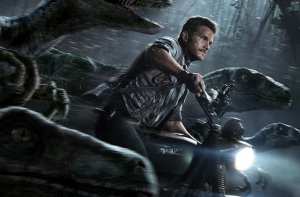 Seriously. Just think about that for a second. The film wants us to believe that dinosaurs are going to be trained to be set loose in say, the maze-like caves of Afghanistan to take out terrorist threats. We’re talking Dino-Drones here and that’s just dumb. Plus, this is all news to Owen who’s been training these Velociraptors for unknown reasons. Wait, what? Anyway…

Now that all the good guys and bad guys are set-up in the sandbox, it’s time for all hell to break loose. Predictably, the Indominus Rex gets loose and sets off a chain of events that are so easy to see coming due the first act set-ups that the film loses virtually any sense of tension, wonder or terror. Well, that’s not entirely fair or true. There are some very well done scenes of people in trouble but these are kind of marred by other, less exciting (and frankly kind of mean-spirited) attacks and deaths. But whatever, right? We paid to see dinosaurs go crazy on us simple humans and we got what we paid for. I’d like to think Trevorrow was using Owen’s Pavlovian clicker stuff to make a comment on audiences who flock to mindless blockbusters like this but that might be a stretch. 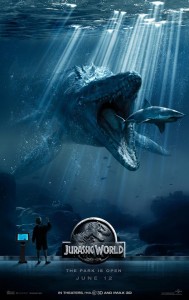 To bring this all back around, Jurassic World isn’t a very good movie. Trevorrow is clearly trying to stake a claim in the big budget tent-pole arena and financially, he’s successful. I also sensed some of “him” trying to come through in subtle ways like the aforementioned tip-off that people these days want everything to be bigger and better as well as in the way we see many characters – main and otherwise – spending time looking at their phones, taking selfies and worrying about how cool they look rather than simply enjoying the sheer wonder of this amazing theme park. And that stuff adds a nice message. But logically the mere existence of Jurassic World makes no sense, the colliding storylines about military exploitation of dinosaurs (again, let that sink in…c’mon), some kind of forced love story between the two leads and the oh-so-Spielbergian “kids with fighting parents who are going to divorce” theme and the script is as big a disaster as the one that breaks out in the park itself.

But what really kind of sticks in my craw is the notion that all summer long, audiences should shut their mouths, turn off their brains and veg out to glorious messes like this one. Studios don’t care if a film makes sense in terms of logic or smarts and they are more than willing to play down to the lowest common denominator. The Indominus Rex is the halved hot dog atop the 800 zillion calorie “American Burger” but really, does anyone want that? If they did then why is the line at say, In-and-Out Burger around the block when the Carl’s Jr. drive-thru is always open? We can do better and deserve better as audiences paying more than we ever have to see a movie.