Happy 30th, Back to the Future! 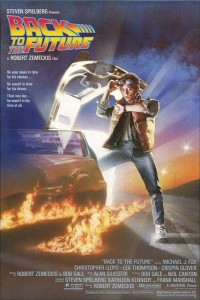 Back to the Future.

Its very name evokes a feeling, a sense, a quality, a cinematic shorthand. Back to the Future wasn’t just the first of a damn near perfect trilogy (watch them all in one sitting if you doubt that, and see how well they line up) – but it changed time travel movies forever.

It was also released thirty years ago today.

The pop culture ripples left in its time displacement wake are staggering. Christopher Lloyd became a star. Michael J. Fox became a bigger star. The time-traveling DeLorean arguably became the most iconic movie car of all time. The movie dropped countless quotables into the zeitgeist, “Great Scott!” “Where we’re going, we don’t need roads,” and comedian Tom Wilson’s iconic bullying as the aptly-named Biff: “What are you looking at, butt-head?”

Unlike those doctored Facebook memes that show up every few months, BTTF was indeed released the day before the fourth of July in 1985, spawning two sequels, a cartoon series, multiple video games, a Universal Studios attraction (that has since been inexplicably retired) and a hit soundtrack featuring Huey Lewis and the News’ “The Power of Love.” Like the movie, the song remains the best representative of it’s time, and yet timeless.

Yet, in a Hollywood reboot culture hell-bent on regurgitating anything with a pre-registered brand name, it is a minor miracle that Universal has not turned out 10 more BTTF films, each worse than the next. The reason for that is that director Robert Zemeckis and co-writer Bob Gale had it in their agreement that’s the only sequels would happen under their watch, and during their lifetime. So when Bob Z says they will make another film over his dead body, yes, that’s what it will take. And believe me, it’s somebody’s job to check the obits in the trades every morning. 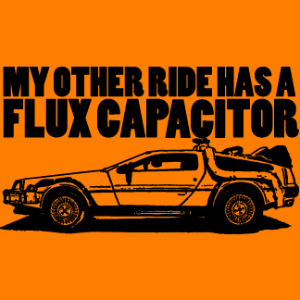 One day before celebrating America, we celebrate the 30th anniversary of a film so perfect, its not only like a finely-tuned timepiece (pun intended), it’s the story of three generations of Americana all rolled into one continuing story, told with warmth, charm and humor.

And really, is there a more American film than Back to the Future?

Under the guise of a silly time travel opus, the Back to the Future trilogy took on everything from lawlessness in the Old West (BTTF3 is still a damn fine western), generational politics, nostalgia, and let’s face it, predicted a good number of things that would actually come to pass.

Of course, there are no flying cars or hoverboards yet, but give them time. We’re talking about a saga that made us nostalgic for the year 2015 two decades before it showed up on our calendars.

How’s that for time travel?