The Spider-Man reboot/reimagining/last ditch effort to really break open the bags of cash that one of Marvel Comics most popular superheroes has only broken open once, maybe twice, has its Aunt May and it’s giving a lot of nerds a complex.

Oscar winner and very pretty lady Marisa Tomei has been cast as Peter Parker’s matriarchal Aunt May, a character who has always been portrayed as a a woman circling around septuagenarian age in the comics and movies we’ve had thus far. This is clearly an issue for comic book purists who are getting their signals crossed as they will now be forced to look at Aunt May in a whole new way. The horror! 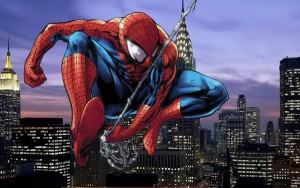 The new (as yet untitled) Spider-Man film is set to drop in 2017 and a few weeks back it was announced that Jon Watt, a somewhat newbie director, would take over behind the lens. Then very young Brit Tom Holland was cast as ole web-head. Somewhere in all that news Marvel head honcho Kevin Feige stated the new film would take on more of a John Hughes movie vibe and through it all one big question remains: does anyone really care about another new on-screen iteration of Spidey so soon after the last reboot?

What do you say? I say any time Marisa Tomei is getting work, it’s a good thing. She’s outstanding!