Who Ya Gonna Call? Dan Aykroyd!

When he’s not busy shilling vodka or recording his entertaining and insightful radio show “The House of Blues Radio Hour,” Dan Ackroyd is still making movies. At least, he’s getting bit roles in movies these days. His last appearances were in the forgettable Get On Up and the nearly unwatchable Tammy but it wasn’t so long ago Aykroyd was an A-Lister. He wants those days to happen again and was the driving force behind the new Paul Feig directed Ghostbusters film and yesterday, he let the cat out of the bag that he has a cameo in the newest film.

According to Aykroyd on his Twitter (punctuation his own): “On GB set shooting my scene with funny beautiful Kristin Wiig Lady GB’sS are adorable, hilarious and badass Exhilarating #ghostbusters” 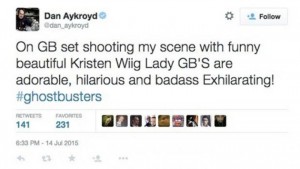 While it quickly became clear that Aykroyd wasn’t supposed to reveal this cameo as the studio attempted to scrub this mention from the trade mags and sites, alas it was too late and now we all know.

Do you think any other Ghostbusters will make an appearance? Rick Moranis hasn’t been busy in decades!