The BBC has dropped the results of their “Top 100 American Films” of all time and, like any list…it’s pretty infuriating as well as kind of neat. Lists, man. They’re the way to go when you want to spark a conversation! I won’t reveal what parts are cool and which parts are infuriating, click the link and gauge your own fury and thrill.

According to the site the rules and how this list was created are as follows: “What defines an American film? For the purposes of this poll, it is any movie that received funding from a US source. The directors of these films did not have to be born in the United States – in fact, 32 films on the list were directed by film-makers born elsewhere – nor did the films even have to be shot in the US. Each critic who participated submitted a list of 10 films, with their pick for the greatest film receiving 10 points and their number 10 pick receiving one point. The points were added up to produce the final list. Critics were encouraged to submit lists of the 10 films they feel, on an emotional level, are the greatest in American cinema – not necessarily the most important, just the best.” 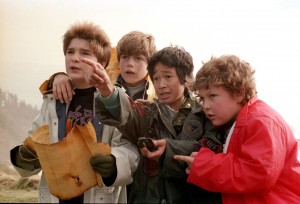 Well, o.k.? So…it’s a list where “film critics” (whatever that means these days) are asked to gauge a film based on an emotional level? If that’s the case with the current level of film criticism, it’s a miracle The Goonies isn’t on the list. I’m also very suspect of Citizen Kane and its place on the list because as amazing, awesome and re-watchable as it is, I’m starting to think it’s high ranking inclusion is a case of people wanting to not feel dumb and strike out on their own….because we all know Vertigo is the greatest film ever made followed by That Thing You Do!. See why I wasn’t asked to contribute?

What do you think was left out and what were you thrilled to see included?

(Also, in case you’re wondering where I got that headline from and why it sounds so familiar….you’re welcome)