One of the best films I saw at this years Oak Cliff Film Festival was Rick Alverson’s black comedy Entertainment. If you’ve heard that name before it’s because Alverson made another pitch black film called The Comedy that starred Tim Heidecker back in 2012 and it’s on Netflix. It’s also probably scarred many, many people as it’s one messed up movie that uses the title The Comedy in the best, most ironic way. I’d bet dollars to donuts that many people saw Heidecker (of Tim and Erik Awesome Show , Great Job!) in a movie called The Comedy and ordered that up only to be blindsided with some epic darkly comic brilliance. Oh, to have been there for that!

Alverson is back with Entertainment which is simply an outstanding film. Darker than The Comedy in many ways but also, funnier (just….trust me) due to the fact amazing, Andy Kaufman-esque comedian Neil Hamburger and his alter-ego Gregg Tarkington star in the film. John C. Reilly is also along for the ride and you should all see this film when Magnolia unleashes it theaters and on-demand November 13. Trust me. 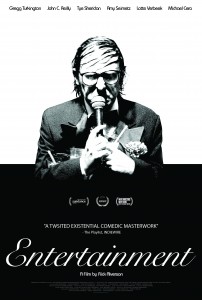