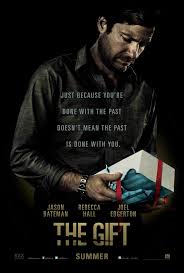 Look, I probably shouldn’t say this. Nobody tell my boss, o.k.? Don’t read this review. In fact, don’t read any reviews about The Gift and just go see it as soon as you can before some loudmouth at the office or gym ruins it for you. Seriously. This is a film that you need to go into fresh as possible because not only is The Gift a fresh take on the endless, ageless stories of revenge, it’s also probably the best movie of the summer.

And yes, I know what you’re thinking: you saw the trailer for it and it looked pretty bad. Jason Bateman, getting all worked up and Joel Edgerton (who also wrote and directed the film) skulking about in a bad wig and some kind of perma-slack jaw thing going on. And I agree, it looked pretty silly. But after hearing some very positive buzz on the Interwebz, I decided to see for myself and indeed, The Gift is a must see movie. I will now tread as lightly as I can in terms of the specifics.

Simon (Jason Bateman) and his lovely wife Robyn (Rebecca Hall) have just moved to Southern California where Simon has scored a pretty sweet job at a security company. While Simon is originally from the area, Robyn is a Chicago girl and the move, while seemingly a fresh start, is proving difficult for her. No sooner have the couple decided on a home in which to start anew then Simon runs into Gordo (Joel Edgerton), an old High School classmate. While nice in a kind of skittish way, Gordo is also kind of odd. It’s hard to describe why and this more than likely stems from the fact we as an audience know he’s up to no good but yeah, something just isn’t right with Gordo. 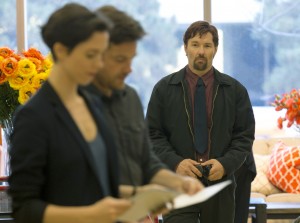 Sure enough Gordo starts to get a bit clingy. First by leaving simple yet rather pushy gifts and then, by showing up unannounced at the house when Simon is at work. And again, the trailer for the film and previous creepy home invasion thrillers have primed audiences’ pumps to expect the worse but Edgerton really does a nice job of slowly escalating tensions that really, if you think about it, don’t have Gordo doing anything wrong. Sure, he’s a bit socially awkward and the fact Simon barely remembers him when Gordo has almost total recall of a High School aged Simon is pretty weird but really, everything’s above the board. That is until Simon tells Gordo he’d prefer if they never, ever saw each other again.

From there things get weird and it’s a pretty intense ride. I counted at least three solid jump scares and honestly, I wouldn’t consider this movie straight suspense but rather a “psychological thriller” that has levels that deepen as the film goes on. Again, without ruining anything, not everything is as it seems on the surface in this film. Then again, many things are. The Gift is a very nimble, well-done film that has a payoff no one will see coming but that’s as satisfying as it is challenging. Much of this works due to the excellent cast assembled as I’ve always found Bateman to be a bit of a smug guy and Hall is convincing as a woman teetering on the edge for reasons unknown.

I was also impressed not just with the cast but also with Edgerton’s ability to craft a very simple story with effective levels of intrigue but also imbue it with a solid directorial style . In many films of this nature (like say, Gone Girl) it feels like the filmmakers want you to spend time wondering about the scheming and mental machinations of the characters onscreen. Here, it’s all pretty simple but right when you think you’ve figured it out, the plot thickens, so to speak. I felt Edgerton’s frequent use of mirrors, windows and glass really added vision punctuation to the story.

If you’ve read this far I thank you but, why didn’t you listen?!? You now know too much! Just go see The Gift and thank me later.