Making Sausage With Josh Trank and the Fantastic Four

There’s all sorts of terms for digging deep into the backstory and machinations of how things happen. Some people call in-depth looks at such things “inside baseball” but I prefer the term “this is how we make the sausage.” Friend, colleague and Entertainment Weekly writer Anthony Breznican (who also wrote an outstanding fiction book titled Brutal Youth) did some sleuthing last week and over the weekend into just what the hell happened with Josh Trank and his work on the latest Fantastic Four movie. While clearly the film is a bomb, Trank didn’t help himself much when he made an off-hand remark via Twitter about the finished film. He later deleted it but nothing disappears from the Internet. 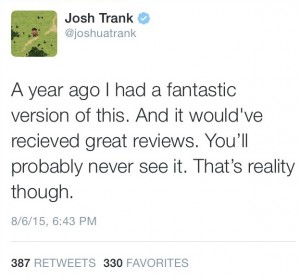 For those who don’t know, the Fantastic Four shoot was a troubled one. While most studios play as much of the bad mojo happening on-set close to the vest, sometimes information seeps out. Such was the case here where things got weird with tales of Trank (or rather, his small dogs) trashing the house he was staying at during the shoot. Those paying attention and reading tea leaves can also look at projects scheduled with the talent or studio involved and notice when they suddenly, seemingly inexplicably, go south, a red flag is raised. This is exactly what happened to Josh Trank who was slated to direct a Star Wars standalone film but as things began looking bad for Fantastic Four, he lost that gig.

While we may never know exactly what happened but Breznican’s piece is well-done. He also doesn’t know exactly what happened and, like me, has concerns about how this debacle (both that of Fantastic Four and Trank’s handling of it) will effect the young directors career. Only time will tell but it’s fairly clear Trank has learned a hard lesson and taken one for the team when it comes to newer directors and studio tentpoles. Click here to read the EW piece.