This weekend Disney’s answer to Comic-Con, “D23” takes place in Anaheim, CA. It’s an event where fans, journalists and lonely people who love standing in lines to be sold movies they were going to see anyway get together to see what The Mouse House has planned for the near future. In light of that, Entertainment Weekly is trotting out some primo Star Wars: The Force Awakens goodies today.
First off, there’s news about their cover story which is available at newsstands now.

Next they dropped 12 new photos from the film. Although there’s not a whole ton of new info to be derived or parsed from the pics, we do get a nice still shot of Kylo-Ren (Adam Driver). 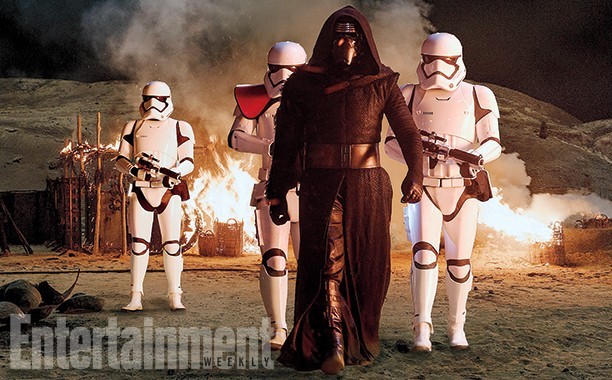 Then, later, they brought out a list of names and tease a little bit about what these names mean. To be honest, I’m not reading this stuff too closely as I want to go into the film as fresh as possible this December. I really want to save a few surprises for you, know, the actual movie. But since this stuff is about to be ubiquitous for the next 4 months, there’s no sense burying our heads in the sand.