Studios are starting to learn that “adult contemporary” movies are a nice little box office niche, things like The Help, The Best Exotic Marigold Hotel, and The Hundred-Foot Journey, usually made by people who graduated from the Weinstein circle of filmmaking. The approach is soft and gooey, full of heartfelt gestures, and probably a few broad jokes. Like horror films, these types of movies can be made relatively cheaply and can usually be relied upon to turn a modest profit. The target audience is generally older, perhaps female, and probably unlikely to go to the movies to see any of the usual popcorn/superhero movies. (It’s safe to recommend them to your mom.) The audience for these movies will emerge, saying how refreshing it was, and they just don’t make ’em like this anymore.

However, like horror movies, none of this means that these movies are all bad. Occasionally someone who knows what they’re doing steps up, someone like the Spanish-born filmmaker Isabel Coixet.  Previously, Coixet made not one but two cancer movies, which are usually an excuse to be very serious and noble, and potentially to win awards. But Coixet did something unusual; she made her movies, My Life Without Me (2003) and Elegy (2008), about complex and organic characters. Rather than lecturing us about the horrors of disease, she told powerful, affecting stories about people.

Her new film Learning to Drive is considerably lighter, and no one gets sick in it. It may seem, at a glance, like something awfully cutesy and potentially annoying. But if you look just below the surface, it contains Coixet’s usual mature, humanist touches. It has no montages where characters get a makeover or try smoking pot for the first time. The behavior is always motivated by honest fears, doubts, frustrations, wants, and strengths.

Patricia Clarkson and Ben Kingsley reunite with Coixet after their work together in Elegy; there, Kingsley played a professor and Clarkson played his soon-to-be-replaced lover. Now Clarkson plays Wendy, a New York book critic who participates in public radio broadcasts about whether critics are necessary (they are, but that’s another article). Working from home from behind a big computer screen and a pile of hardcovers, she’s shocked when her husband leaves her for another woman. At first, she’s in denial, expecting him to come back, but eventually, thanks to a push from her college student daughter (Grace Gummer), she realizes the truth. 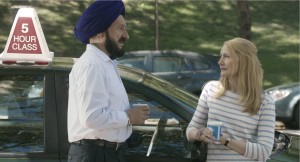 Her daughter is spending a semester upstate working a farm, and now Wendy can’t visit her because she can’t drive. Her husband always did all the driving. That’s where Darwan (Kingsley) comes in. He’s a transplanted Sikh, with a rope of long hair wound up under his turban and a thick, knotty beard on his chin. He lives in the big city with his nephew (Avi Nash), and works two jobs: taxi driver and driving instructor. Wendy happens to catch his cab on the night she’s dumped, and she sobs all the way home. Kindly Darwan doesn’t charge her, but later notices that she left an envelope in the back seat. He brings it to her the next day, she notices the placard on top of his car, and she impulsively inquires about lessons.

During his scenes, Darwan deals with racism, from the cops raiding his shared apartment and arresting his roommates to passerby calling him “Osama,” with dignity, works his two jobs, and tries to teach his nephew a thing or two about life. Meanwhile, his sister, who still lives in India, is busily trying to find him a bride, and she succeeds. Jasleen (Sarita Choudhury) is on her way. It’s hard to watch the movie and not think of Kingsley’s Oscar-winning portrayal of Gandhi (1982), given that both characters hail from India and have Indian accents, but Kingsley is a pro and he creates two entirely different characters; I would imagine that there are extremely subtle differences in his accents that only the sharpest ears could discern.

Wendy and Darwan’s time together might have been the movie’s cutsiest stuff, but Clarkson and Kingsley are so classy, so exceptionally talented, and they have such a strong chemistry that you quickly drop your guard and go with it. Darwan is, not exactly stiff, but calm and sturdy and a little fierce. He has certain rules of the road, a certain etiquette, that should go a long way with viewers; it’s a lot like life. Anticipate. Be aware. Keep your eyes open. Share the space with the other living things around you. These concepts are more relevant (i.e. more forgotten) than ever. The driving scenes are also helped by the feeling — and the fact — that the actors really are behind the wheel and not just being towed. (It’s one of my biggest pet peeves in movies: actors driving cars that turn to look at their passengers for extended periods of time.) Wendy’s tension, trepidation, and exasperation as she learns are palpable.

To Coixet’s credit, the movie is not homogenized, does not shy away from sex, and especially the uncomfortable, troublesome parts of sex. After a discussion about blow jobs, Wendy wonders if she can win her husband back by bestowing said act upon him when he returns to the apartment to pick up a few things. Later, she meets an eligible bachelor who practices tantric sex. After what seems like a long time of waiting for him to “finish,” she finally asks, “can we stop?” Darwan, for his part, gets a few pieces of romantic advice from Wendy on how to approach his new wife, but can’t stop from being painfully awkward with her. (Jasleen gets her own scenes of trying to adapt to America.)

Of course, the central male-female friendship between Wendy and Darwan eventually achieves its own romantic tension, especially after a shared popsicle (the best in Queens) and a couple of attempts at the driver’s test. But once again Coixet does the movie justice by allowing tension to just be tension. Still, it also achieves a certain softness that this genre seems to require, and that softness makes the movie feel less profound than, say, a Brief Encounter. It feels more frivolous; it’s an entertainment rather than an artwork like Coixet’s previous films. However, that’s not necessarily a bad thing. With every actor in Hollywood getting cast as superheroes, it’s OK for actors to have fun playing grown-ups too. Plus, I’m pretty sure my mom will like it.