Steve Jobs: The Man in the Machine (Review)

Home » Article » Steve Jobs: The Man in the Machine (Review) The Oscar-winning documentary filmmaker Alex Gibney is a force to be reckoned with. As a director or producer he has made movies about the corruption of Enron, the use of torture by the United States in Afghanistan, the U.S. occupation of Iraq, pedophilia in the Catholic Church, journalist Hunter S. Thomspon, WikiLeaks founder Julian Assange, athlete Lance Armstrong, the scandalized New York governor Eliot Spitzer, the war crimes of Henry Kissinger, the scary super-lobbyist Jack Abramoff, and a new documentary on the Church of Scientology. But he may have found his most daunting subject in Apple co-founder Steve Jobs.

Steve Jobs: The Man in the Machine begins with Gibney wondering about Jobs’s legacy, specifically the outpouring of emotion and the prevalence of heartfelt tributes when he died of cancer in 2011. One designer even created a lovely and sad Apple logo with Jobs’s profile in place of the bite. Why should a man who was basically a corporate CEO get the same kind of adoration that, say, an artist, a star athlete, or a world leader might? Why did people love Steve Jobs? Then, for 128 long minutes, he digs through Jobs’ life and comes up with… nothing much. 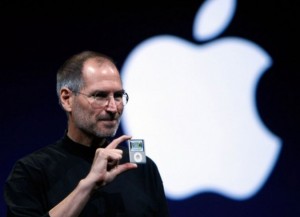 The documentary gives us the details of Jobs and Steve Wozniak co-founding Apple. It talks about all the wonderful things Apple made: desktop computers, laptop computers, iPods, iPhones, iPads, etc. It acknowledges that these things dynamically changed the world. In the beginning, Jobs had a rebellious spirit. He helped invent a device that could allow a user to make free long-distance calls. Then he and Woz picked up a job building a circuit board for an early Atari game; they did it, and then Jobs lied to Woz about the size of their paycheck and kept most of the money.

That’s the first thing that paints Jobs not only as a jerk and a bastard, but as someone who could be flat-out evil. When a girlfriend got pregnant, rather than paying her support out of the millions he had already earned, Jobs staged an elaborate legal farce, claiming he was impotent and incapable of impregnating anyone. The movie also shows one of the Chinese factories responsible for making Apple hardware — and shows us the suicide-prevention nets mounted all around the building. And when the technology blog Gizmodo got ahold of an early iPhone prototype and posted an exclusive scoop, Jobs’s reaction was like something out of Scarface; you didn’t want to cross this guy.

Gibey has plenty of footage of Jobs, both as a young hellraiser and as the respectable presenter at many Apple press events, but getting to the heart of the man is difficult. We learn that Jobs was adopted, which could, but doesn’t really, explain some of his behavior. We hear from many of his trusted yet micromanaged co-workers, who did much of the inventing, but did not receive much credit. He named a line of computers after a girl he knew, but he could not connect in any meaningful way with live people. Even his spiritual advisor agrees with this.

The movie reaches its climax with the sober realization that, while the iPhone changed the world, it also left the world as a population of zombies staring at little screens, hearing shut off by earbuds, barely noticing or reacting to anything going on in the real world. No connections. Gibney even includes a movie clip from Wim Wenders’ Until the End of the World (1991), a haunting moment I’ve never forgotten. It shows a strange future in which people have the ability to record and watch their dreams. They become hopeless addicts, staring at little hand-held screens, glued there until their batteries run down, collapsing into despair. 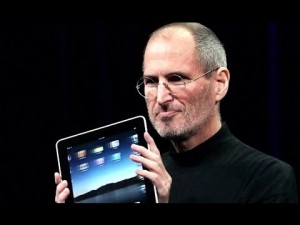 In other words, Steve Jobs: The Man in the Machine leaves you feeling pretty hopeless, like you’ve been arguing with a barstool doomsayer for hours and hours and lost. I saw it as the opening night selection of the 2015 San Francisco International Film Festival, and the general mood as people headed out to the after party was: why bother? Maybe the cruelest and most heartless people really are the ones that run the world. But what was Gibney’s job here? Surely it would have been irresponsible to present a squeaky-clean portrait of Jobs, one that would cement his reputation with his fans. Could there have been some other balance? Some way of possibly understanding Jobs’s pathological side? Some way we could have found empathy for whatever sadness or emptiness he was experiencing? None of that is here: just a hand-chosen selection of journalistic facts that leaves us wanting rather more.

Gibney isn’t really to blame. It’s much easier to paint a portrait of a rebel or an outsider, as with Gibney’s films Gonzo: The Life and Work of Hunter S. Thompson (2008), Client 9: The Rise and Fall of Eliot Spitzer (2010), and We Steal Secrets: The Story of Wikileaks (2013), than it is to paint a portrait of an icon. Thompson, Spitzer, and Assange tried to change things that were stuck, stodgy, or just plain wrong; they were often ostracized or punished for their work. We get that. That’s cool. But Jobs worked in a void, bringing new ideas, gaining immeasurable wealth and power, and all the wickedness that comes with it. His is not an underdog story, and most people will never be able to identify with him on a personal level. The Ashton Kutcher biopic Jobs (2013) illustrated this, and, Danny Boyle’s upcoming biopic Steve Jobs will undoubtedly face a similar problem.

At the SF Film Festival party, which took place at a wax museum, there was a life-size figure of Jobs, parked in a room that also featured President Obama and the Dalai Lama, as well as fellow tech-pioneer Mark Zuckerberg. What to make of that? What can you do? Jobs is on a pedestal, and a journalist or a filmmaker or a storyteller has one of only two choices; he can either try to climb up there with him or knock him off.