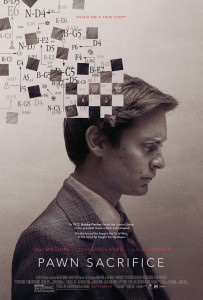 Director Edward Zwick is pretty much an invention of the movie business. Ever since the inception of the Oscars, studios have divided their investments between movies that will hopefully make money, and movies that will hopefully make them look good. Oftentimes a genuinely great filmmaker will make a genuinely great film that actually gets noticed, but just in case, directors like Zwick are needed. Whereas a genuinely great director makes a great film from his soul, Zwick makes films based on what other great films might look like. However, his new movie, Pawn Sacrifice, somehow feels more like a struggle than a statement, and it’s arguably his best movie in a couple of decades.

Going back, Zwick first struck gold with Glory (1989), an amazing combination of war movie, true story, and a plea for racial tolerance. In that mixed-up year of Driving Miss Daisy and Do the Right Thing, it was nominated for five Oscars and won three. Legends of the Fall (1994) was nominated for three Oscars and won one. The Last Samurai (2003) received four nominations, Blood Diamond (2005) received five, and Defiance (2008) received one. And, Glory notwithstanding, there was not a worthwhile film among them. His penchant for telling stories of the hardships of other cultures through the eyes of white, male heroes was beginning to wear thin. (One of his most acclaimed films, Courage Under Fire, from 1996, featured Denzel Washington in the lead, but was ignored by the Oscars. His previous film, Love and Other Drugs, while not at all good, did at least have an award-worthy performance by Anne Hathaway.) 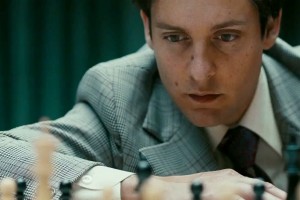 So now we find Zwick telling the story of a white American who tangles with the Russians, but he’s far from heroic. He has problems of his own. Pawn Sacrifice tells the true story of chess champ Bobby Fischer (Tobey Maguire), who became the first real force to be reckoned with from the U.S. in the game of chess. Everyone keeps telling Bobby that he’s a patriot, that he’s winning the war for all of us, but Bobby doesn’t really care about that stuff. He just wants to win. He wants to beat the best in the world, whether they’re Russian or little green men. He’s arrogant and thinks only of himself. Thus we have a refreshing change for a Zwick film, and perhaps a more honest approach. Maybe Zwick identifies with Fischer, as a guy who is perceived to be saving the world, but really just wants to do his job?

Pawn Sacrifice tells the story of Bobby from childhood, having taught himself chess at a young age and starting to beat experts soon after. After managing to alienate his family, Bobby is approached by lawyer Paul Marshall (Michael Stuhlbarg), who offers to take care of everything he will need on his road to the championship. They hit the road, joined by perhaps the only man Bobby trusts, a priest William Lombardy (Peter Sarsgaard) who once coached Bobby (and who once beat him). At first, the Russians come to California in 1966, led by the grand, handsome Boris Spassky (Liev Schreiber), but the temperamental Bobby decides the match-up is unfair and walks out. 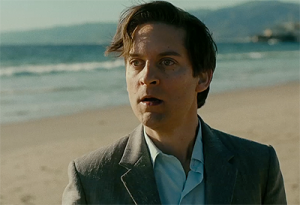 A few years go by and Bobby becomes the equivalent of a rock star, or a pro athlete. He’s a household name, and kids begin to play chess to be more like their hero. But in private, Bobby is becoming more and more unhinged, convinced that the Russians are bugging his living space, and exploding with little provocation. Everything leads up to another championship, in 1972 in Reykjavik, Iceland. Bobby and Boris go head-to-head in a 21-game series. Bobby becomes incensed at the whirring of TV cameras and refuses to play until the match has been moved to a quieter space (a coat room). (Boris also pulls a “Bobby” and complains of a squeaking chair; he insists that it be x-rayed.)

Then comes game six, which is considered in chess circles to be the greatest game ever played. Unfortunately, the movie doesn’t exactly show the game in detail, rather, it places this factoid in the closing title cards. Zwick is stuck with the reality that not everyone in the audience plays chess and not everyone would understand shots of pieces moving around a board. (I, for one, love chess and would really have liked to see more details of this game.)

Zwick’s solution is serviceable, though. If he can’t use the board, he uses time clocks next to the board for suspense (each player has only a certain amount of time to move, and punches a time clock at the end of his turn, which automatically starts his opponent’s time clock ticking). The director also uses Sarsgaard’s great skill as an actor. William Lombardy and Paul Marshall are shown backstage, re-creating Bobby’s moves on their own chessboard. Marshall doesn’t quite understand what’s happening, but Lombardy makes breathless little comments about the genius of each move. It creates more than a little excitement.

Maguire is responsible for most of the drama. He gives a feverish, volatile performance as Bobby, channeling inner torments like a boiling pot; the rage just spills out as if it has a life of its own, without care or consequence. We are given flashbacks to Bobby as a child with his single mom, encouraging his chess playing, but also neglecting him while she throws parties for Communist friends (the movie doesn’t draw a direct connection between this and Bobby’s paranoia, but it’s mildly suggested). For an actor that has frequently relied on pleasantness, I think it’s the most daring thing Maguire has ever attempted or pulled off. It’s a shame that Zwick couldn’t have found a subtler way to present the demons, as director Bill Pohlad did earlier this year with Brian Wilson in the terrific Love & Mercy. Zwick’s approach is noisy and twitchy, although it does make us feel the same irritations that Fischer might be feeling.

Overall, Pawn Sacrifice works because Zwick lets all his themes collide like black and white pieces on a board, never choosing a victor or a final answer. We see chess moves that can be appreciated by both players and non-players. Fischer was both genius and crazy. He was a patriot and he was selfish. He inspired many but infuriated those close to him. In another era, Zwick might have been tempted to resolve these things — make them black and white — and present Bobby Fischer as a hero, but now he’s allowed to be something more complex. Life is more than a game.