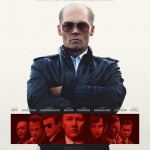 Like the character it portrays, Black Mass avoids flash and grandeur and joins a long tradition of good-if-not-great gangster movies.

American moviemakers have been making gangster movies since the beginning of movies — Raoul Walsh’s 1915 Regeneration may have been the first — and there’s never any shortage of gangster stories, true or fictional.

But sometimes filmmakers try to say something important about America or gangsters or both, and the movies can tend to go on a little long and swell a little too big for the stories they’re telling. Sometimes this works, as in, say,The Godfather. Other times it’s just tiresome: Johnny Depp’s movie Public Enemies for example.

So Black Mass director Scott Cooper (Crazy Heart, Out of the Furnace) focuses on certain things that happened to certain characters in a certain time and place, leaving the big stuff for us to figure out.

That’s good news for Depp, who gives one of his richest performances as James ‘Whitey’ Bulger, an Irish-American mob boss, murderer, and racketeer, who ruled the South of Boston.

What makes Bulger a fascinating character, however, is that he was an informer to the FBI for over 20 years, connected with agent John Connolly (Joel Edgerton), his childhood friend. 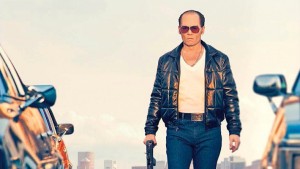 Also, perhaps even more strangely, his brother, Billy (Benedict Cumberbatch), served as the president of the Massachusetts Senate.

From time to time, they would all get together for a Christmas dinner or a barbecue. No big deal.

The movie covers some major events in Bulger’s life, such as providing a (literal) boatload of weapons to the IRA, but these are less like history lessons than they are extensions of the character.

Director Cooper simply steps aside and populates his movie with an incredible array of actors, filling its edges and corners with rich characters.

Rory Cochrane is Bulger’s sad-sack right-hand man, Jesse Plemons is hired muscle, Kevin Bacon is a pushy FBI man, Peter Sarsgaard is a coke-addicted street hustler, Julianne Nicholson is Connolly’s unhappy wife, and the list does not stop there.

But they are all in Bulger’s shadow. Depp dons thinning, slicked-back hair, oversized eyewear, a brown, crooked tooth, and ice-blue eyes; he’s like a shark. He can hypnotize anyone in the room, intimidate them, get them to follow him — and fear him. He can catch you off guard, too, as in the memorable “recipe” scene.

The key to Black Mass is that he’s careful, protects himself, never getting too big for his britches or forgetting where he came from. It all results in a good, form-fitting movie that’s easy to grasp.