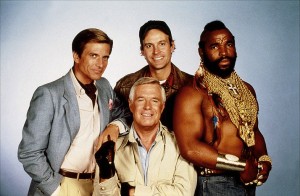 According to this article on Deadline, the iconic ‘80s juggernaut known as The A-Team is being developed for a return to TV. Fast & Furious writer-producer Chris Morgan will executive produce alongside original series creator Stephen J. Cannell’s daughter, Tawnia McKiernan with a script written by Sleepy Hollow executive producer Albert Kim.

Who saw that coming?

Rebooting projects with strong brand recognition isn’t exactly a new idea. TV properties have been known to come back with varying degrees of ratings and critical success with examples as diverse as Battlestar: Galactica and Hawaii Five-O coming to mind. But for every one of those successes, there’s a Bionic Woman or Charlie’s Angels reboot that never makes it past episode 3.

And let’s not forget that the Star Trek brand was like the Madonna of Sci-Fi television, reinventing itself with every new series, becoming something different with each incarnation, but still keeping the Trek moniker.

But in the case of this reboot, it’s not just a different captain in a different timeline or a new ship thousands of light years away from home. This new A-Team plans to shake up the established roster, possibly with the plan to appeal to a broader audience, by installing a strong female lead as part of the team.

This begs the question: How far can you skew from the original concept and still have the essence of the show?

Changes like this are not unprecedented, of course. In fact, one of the biggest success stories of this type of character change is the aforementioned Battlestar: Galactica. That series did a very successful gender swap with Katee Sackhoff cast as the Starbuck character (oddly enough, first played in the ‘70s series by original A-Team member Dirk Benedict).

So, with the plan of a new team consisting of both male and female members, do we get a female “Face,” who uses her feminine wiles to seduce people into giving her what the team needs? Does Ronda Rousey shave her head into an extreme punk hairstyle and become ass-kicking “Betty Baracus?” 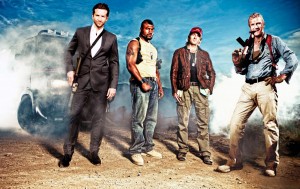 And what, if anything, will this new TV version learn from Joe Carnahan’s failed attempt at bringing the team to the big screen back in 2010? While I thought the casting of the feature film was great, I personally think the film would have done better with fans of the original as well as bringing in a new audience if it had been a little more light-hearted.

Carnahan’s version was filled with so many terse, hateful, unlikable characters that the “A” in A-Team might as well have stood for “Assholes.”

There is probably a delicate balance somewhere in the middle. I hope the plan comes together for the new team behind the new A-Team and they can find the right formula for success.