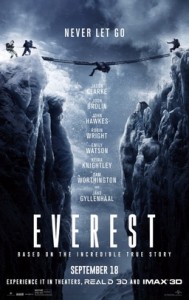 Cinema has long been a wonderful place to bring to life true stories of brave men and women from all corners of the globe who overcome incredible odds in order to survive life-threatening situations. Films of this nature are so multiple and varied it can be hard to narrow it down to a few but Apollo 13, 127 Hours, Rescue Dawn and Schindler’s List all come immediately to mind. These are harrowing but true tales of people who made it through seemingly insurmountable odds and came out alive. If you’re a fan of movies like these and true-life stories of overcoming incredible odds in general, don’t go see “Everest.”

While “Everest” is indeed an edge of your seat thriller with spectacular and believable effects, it’s also a straight-up disaster film and a real drag of a movie. Based on an ill-fated 1996 commercial trek to the top of the highest peak in the world the film introduces us to a diverse collection of patrons who have each paid upwards of $60,000 to be lead to the highest point in the world by rugged professional mountain climbers. Apparently this was and is a big thing but in 1996, it was a just burgeoning business that drew hundreds to Nepal in the springtime to attempt the feat. While certain levels of physical fitness were required to make the trip the whole goal was to provide the “everyman” (or everywoman) a chance to do something spectacular that they could bring home to their simple lives.

Thus as the film begins we meet our gang starting with Doug Hansen (John Hawkes), a small-town mailman/construction worker who’s taking his third shot at reaching the peak, Beck Weathers (Josh Brolin who is either channeling or finally becoming Tommy Lee Jones here), a pure bred Texan who only feels at home atop a mountain, Yasuko Namba (Naoko Mori), a small but mighty Japanese woman who wants to prove to herself she can make the climb and Jon Krakauer (Michael Kelly) who unless you’re totally familiar with the story is the only one you know will survive because he wrote a book that’s eerily similar to this film as well as Into the Wild. These people are all in the capable hands of Rob Hall (Jason Clarke) a sweetheart of an Aussie who takes his job very seriously. And he needs to as wife Jan (Keira Knightly) is just entering her second trimester with the couple’s first child. As one would suspect, each character is given a teeny trait that makes it super important they not die.

“Everest” is a better than average, intriguing film that again, unless you’re familiar with the story, never lets on to where it’s going. While there are some rather light brush strokes in terms of who is responsible for the dramatic turn the climb takes, the film is essentially about people in a brutally difficult situation trying to pull through. Well, at first it is. Then the film skews dangerously close to “torture porn” as characters are dispatched in myriad ways. Still, I’d be lying if I didn’t say the journey was an exciting one. Plus, you really want to see who, if anyone, will survive. 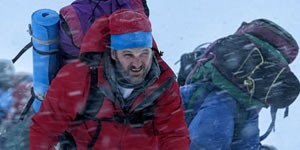 As the group arrives in Nepal they have a good 2-3 weeks of training, trekking and acclimation to the wickedly high altitude and this gives viewers a chance to get to know them a bit more intimately. As noted, in 1996 the idea that one could pay to be “safely” taken to the top of Mt. Everest brought a huge swarm of people to the mountain and this is an odd combination of camaraderie and tension in the film as climbers of varying skill and demeanor are leading equally varied groups. This is where mellow dude-bro Scott Fischer (Jake Gyllenhaal) comes in. He’s a boozy ski bum type who never says “no” to a challenge even if safety is a concern. While he and Hall are colleagues they couldn’t be more different and it immediately becomes clear their styles could clash.

Still, Fischer and Hall form an alliance in order to cut down on the number of groups attempting the climb as it’s become apparent that long lines of climbers are slowing the process of mounting the peak to a rush-hour crawl. This simply won’t do as there’s a narrow window in which to reach the 29,029-foot apex and safely get back down and with so many people attempting it and a total lack of rules or scheduling, it’s become even more difficult. Fischer and Hall couldn’t be more different and as the final leg of the journey begins we see the plusses and minuses for each mans technique. Yet several moments in the climb suffer from, shall we say “needed items (oxygen, rope) not being where they’re supposed to be” and with so many characters in the mix, the film never really says who screwed up. A direct wagging of the finger would have certainly added to the tense vibe but instead these moments become just another step towards impending doom.

While I’m certainly no proponent of 3-D the viewing I saw of “Everest” only allowed for this option and I have to admit, it works here. “Everest” doesn’t play dumb with the 3-D and instead uses it to add depth to the climb and color and texture to the surroundings. It rarely bothers with the cheap trick of trying to seemingly roll things out of the screen at you which I appreciated as it would have been easy to do. The 3-D here, aside from the inherent darkness of the screen that comes with this technology, is indeed pretty cool and I felt it added to the experience. 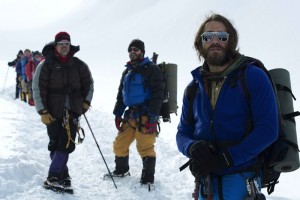 The acting on display is also well done although a good half of it is done by guys with ski caps near their eyes and scarves over their faces. Fear not! There’s a whole other cast of women (and Sam Worthington) back on steady ground making tearful phone calls to the team in peril. They include Helen (Emily Watson) who runs base camp and stayed-at-home wives including the aforementioned Knightley and Beck’s homespun rich Dallas wife Peach (Robin Wright) who’s scenes seem conspiculously tacked on. The moments with these women are rather cliché but help give the audience a bit of a breather from the harrowing mountain scenes that just get worse and worse for the people involved.

While I would certainly recommend “Everest” I can’t lie and say it’s fantastic. It’s pretty good and the special effects are truly spectacular. I often was stunned at just how real many of the scenes looked and felt and that’s pretty impressive. I had some issues with the treatment of some characters including the prototypical crying and helpless wives but Texan Beck Weathers and his characterization was a real sticking point.

When first introduced Weathers is wearing a 1996 Dole/Kemp campaign shirt. While I’m certainly no fan of the GOP I swear I’m not being nitpicky when I say – in no way is this garment needed or useful to the story yet it’s clearly pointed out by the film. With Republicans currently in state of distress and disconnected unpopularity (to say the least) the choice to shed light on Weathers’ political alliance is weird and distracting. I kept waiting for him to make fun of the Nepalese people or go after Fischer for being a hippy. When Weathers’ fate is sealed (that’s not a spoiler) it just seems odd and kind of elitist which was also distracting. Speaking of, Fischer is also an oddly constructed character. Gyllenhaal chooses to play him as a kind of cold-weather Jeff Spicoli (Fast Times at Ridgemont High) but it’s near impossible to believe his beer, wine and adrenaline junkie behavior would be acceptable on Mt. Everest either socially or physically. As a result his fate is also oddly received. Therein lie the biggest problem with “Everest.”

There’s too many characters that are too loosely constructed yet they’re given just enough personality to almost make you care. It often feels as if director Baltasar Kormákur knows the real attraction here is the mountain, the cold and the chaos so why bother with character? But if that’s the case, why bother casting significant and popular actors in these roles? If it’s just to kind of do an anti Star Trek thing wherein not just the person you don’t recognize that dies when they hit an exotic location, I guess that’s ok. Nothing wrong with the old rope-a-dope. But I would have preferred less characters with better anointed traits that when we lose them, it becomes difficult to cope with. “Everest” has all the tools to make a taught and suspenseful film but often takes the lazy way out as the body count piles up. Go for the familiar actors, stay for the special effects.