A few weeks back my 8-year old daughter wanted to watch Hotel Transylvania as she’s recently been getting more and more into monster type stuff which I’m all in favor of. She’s a sensitive kid and we’ve been attentive to that but lately she’s been pushing her personal boundaries which I think is awesome. Granted, Hotel Transylvania isn’t scary but it has “monsters” which is something that has previously been akin to “brussel sprouts” when the subject was broached. So, we watched Hotel Transylvania and much to my surprise, it was just awful. Not funny, not clever, not….anything but a bunch of dumb gags looped together to form a “kids movie.” I was not amused. We were all bored.

Still, when Hotel Transylvania 2 hit screens, she convinced us to take her. I thought maybe they had upped their game since this is a potentially lucrative franchise and lord knows Sony Pictures Imageworks animation department could use some of that sweet, sweet franchise dough. But nope, Hotel Transylvania 2 is just as dumb, boring, unfunny and irritating as the first one, maybe even more so. This bums me out on several levels the first few of which include; the brilliant Robert Smigel co-wrote it (he also wrote part one), Genndy Tartakovsky (Samurai Jack, Star Wars: Clone Wars) directed it (he also directed the first one) and it stars a bunch of old-school monsters who are basically riffs on the classic Universal Monsters of which I’ve always been a fan. So, why do these movies suck so much? They suck because they play to the lowest common denominator of “funny kids movie” which presupposes that kids are stupid. While Hotel Transylvania 2 doesn’t sink to the depths of sheer gibberish talk as this summers hit film Minions does, it still acts as though kids are dumb and will only respond to bad jokes, pop-cultuure references and fart jokes. Someone alert Pixar that Sony Pictures Imageworks has found the key to making successful animated films, they seem to be sinking fast.

Hotel Transylvania 2 catches viewers up in fast fashion with Mavis (Selena Gomez) and her now cuckolded bro-dude boyfriend Jonathan (Andy Samburg) as they get married and gather the whole “Drac Pack” for the event. Once a hyperactive world traveller, Jonathan is now content to never see the light of day and be the token human in a hotel for monsters. It’s a good message that you should most definitely give up your hobbies, dreams and passions for a one-sided relationship. Remember that, kids. But this awkward messaging isn’t even the worst message in the film.

Soon the couple breaks the news to Mavis’ overbearing father Dracula (Adam Sandler) that they’re expecting a baby. As with any “mixed race couple” (Mavis is a vampire, Jonathan a douc….human) the immediate question is not about having a happy and healthy baby but rather, what “race” will it be. I’m kidding of course as this is 2015 and sure, maybe we all think “Gee, wonder if that child will resemble mom or dad more?” we sure as hell don’t say it out loud or make a big deal out of it. Oh but wait, this issue becomes the entire backbone of the lousy story in Hotel Transylvania 2. Dracula wants the kid to be a monster and will stoop to any means necessary to make sure it happens. Except magic because that would solve this idiotic story too quickly seeing as he probably has access to spells and whatnot.

The entire first act of Hotel Transylvania 2 covers about 5 years in 15 minutes which is fine. And as is suspected, once the baby arrives Dracula becomes incredibly anxious as to whether or not the kid will be a monster. Not a “vampire” mind you, a monster of any sort. Kind of reminds me of dads when I was a kid hoping their kid wouldn’t be a “fag” but rather a manly man of any sort, just so long as they are not gay. And if you think I’m reading too far into this, that’s fine. But I’m not. There’s some pretty complicated issues being toyed with here and not only are they clumsily handled, I’m pretty sure I don’t need Adam Sandler (who co-wrote the script) helping my child navigate sensitive social issues. Anyway… 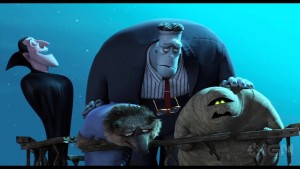 Dracula convinces the stunningly stupid Jonathan to take Mavis to California just to check it out. Since their kid hasn’t become a “monster” yet by age 5, it’s starting to look like the kid may just be human after all. If this is the case, no sense sending the kid to monster school and Jonathan’s parents would love to have their grandchild back home. So, off Mavis and Jonathan go to sunny California (remember, Mavis is a vampire) leaving their young child with Dracula and his idiotic monster friends Frankenstien (Kevin James), Murray the Mummy (Keegan-Michael Key, replacing the probably way too busy CeeLo Green), Invisible Man Griffin (David Spade) and werewolf Wayne (Steve Buscemi) who attempt to take the child to various places they grew up around to help the real monster inside come out. Kind of like a dad taking their gender-neutral son to Hooters to see if it sparks anything.

Look, I know you’re probably saying “calm down dude, this is a kids movie. It’s funny for kids and we all laughed” and again, that’s fine. But when we as parents and paying moviegoers turn crap like this into box office gold, it just perpetuates more bad movies as studios try and wring out every potential drop. Making matters worse is this film and Minions almost seem like they know they’re making utter garbage that people will pay to see over and over again. While I too am guilty of paying for Hotel Transylvania and Hotel Transylvania 2 I’m as least trying to make it better by warning those who haven’t seen it (which at this point is probably a moot one) to skip it and either see something better or just read a book. Hotel Transylvania 2 sucks but as of this writing it’s earned more than $90 million. That means in 3-4 years we get another helping of this animation fast food that does nothing but mint money and dumb people down.