Filmmaker John Roecker was lucky enough to be on-hand to document the recording and subsequent early performances of Green Day’s monumental album “American Idiot” and the results are the 11-years-in-the-making documentary Heart Like a Hand Grenade. While the documentary is fun and makes some nice attempts to add an artsy flavor to the typical “making of an album documentary” it does tend to drag on a bit. However fans of the band won’t mind and the glimpse into the creative process of one of the last great rock bands make the film a worthy watch.

I’ve managed bands throughout the years and as such, I’ve been errr…”lucky” enough to be in the studio with them while they recorded. What starts off as a thrilling, exciting adventure eventually melts into a hyper-focused, typically tedious chore and this is the case for Green Day as well. “American Idiot” was a comeback album of sorts (the bands previous effort “Warning” wasn’t well received) and was also their most ambitious to date. Green Day was and is one of the only bands to take on the crappy state of affairs in the U.S. following our invasion of Iraq but the album, while indeed an angry one, isn’t all protest songs mixed with doom and gloom. It’s also a rock opera and features some of the best work the band has ever done. The fact Roecker was there to capture this is very, very cool and the film teeters between fascinating and a bit vanilla.

For instance, there’s no arguments over anything at all in the film. While certainly the three guys who make up Green Day and their ubiquitous producer/friend/confidant Rob Cavallo (who also signed the band to Reprise back in the day) may work so well together after twenty some-odd years they don’t bicker, that still seemed odd. It also makes the film a bit meandering as there’s very little tension onscreen. Plus, everyone who knows anything about popular music knows the album not only gets finished and is brilliant but also becomes their biggest seller before becoming a hit Broadway play. Still, the lack of conflict somewhat detracts from the film. 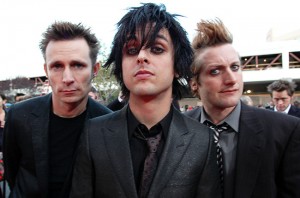 Luckily drummer and band clown Tré Cool is always on hand to dress up in a ludicrous way or just kind of insert a touch of silliness into the work at hand to keep the band – as well as viewers of this doc – entertained and feeling fresh. After several long days and weeks in the studio, people get downright punchy and the film wonderfully captures many of these goofy, hysterical moments that can only be born from true exhaustion.

I’m also a big fan of seeing or hearing about successful artists creative process and Green Day front man Billie Joe Armstrong is a pretty amazing case study. Heart Like a Hand Grenade shows a man in the throes of a creative cascade where ideas seemingly flow from brain to mouth to hands in smooth, deft spurts of artistic fury. Watching him thinking aloud of how the tracks should lay out or seeing the early stages of a now popular song like “Wake Me Up When September Ends” or “Boulevard of Broken Dreams” coming to life is just plain cool and there’s many moments like this in the film.

Heart Like a Hand Grenade is an intriguing look at a band making an album that would reach massive popularity and we’re lucky to have this fun, fly-on-the-wall look at it all coming to be. While I’m unsure as to why the film took 11 years to make my guess is that director Roecker had a ton of material to work through and put together. While at first I felt like this doc seemed like something that loses some appeal being so late after the whole thing happened I now feel like it makes me (and hopefully everyone) realize what a fantastic rock band Green Day was and still can be.