Well color me intrigued by this trailer for Don Verdean, the latest film from director Jared Hess (Napoleon Dynamite). While Hess has whiffed fairly hard post-Napoleon Dynamite with Nacho Libre and Gentleman Broncos I’ve always been rooting for him and after watching this trailer, my hope springs eternal.

Don Verdean is about a once famous archaeologist played by Sam Rockwell who gets hired to try and bring artifacts from the Holy Land back to the good old U.S. of A. Apparently Sacha Baron Coen was either too busy or didn’t feel like playing Borat again so they got Jemaine Clement (Flight of the Conchords) to be Verdean’s sidekick. The film also stars Danny McBride, Amy Ryan and Will Forte and to me it looks like a low-fi Wes Anderson film. Kind of The Life Aquatic With Steve Zissou Lite. Don Verdean digs in to theaters and on-demand this December. More info below… 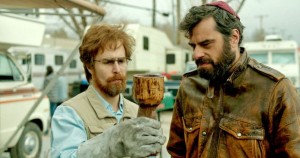 Hired by an ambitious small-town pastor to find sacred relics in the Holy Land, a self-proclaimed Biblical archaeologist comes up short and his attempt to cover up his failure fuels a comic conspiracy from the filmmaking team behind Napoleon Dynamite and Nacho Libre. DON VERDEAN stars Sam Rockwell, Amy Ryan, Jemaine Clement, Leslie Bibb, with Will Forte, and Danny McBride.