In August of 2012 filmmaker Charlie Kaufman ran a hugely successful Kickstarter campaign for his newest film, a weird stop-motion animation picture called Anomalisa. Kaufman wrote the script and Dan Harmon (of Community fame) executive produced, alongside others. Earlier this year the film played some film festivals (I missed it at Mill Valley, grrrr) where it garnered flat out rave reviews and today, we can all see what the fuss is about.

Above is the trailer for Anomalisa which hits theaters in late December. For those of you scoring at home, that equals “Awards Season” and it’ll be interesting to see how this film fares. It’s basically an animated movie for adults, something I’m a big proponent of but also something that rarely happens. Maybe Anomalisa can reverse that trend? In any case, anything new from Charlie Kaufman is worthy of celebration and this trailer looks extremely Kaufman-esque: Funny, sad, mysterious. More info below… 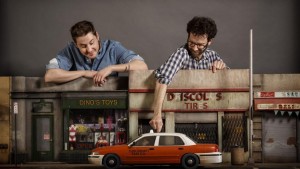