It’s hard to believe the Rocky franchise has been going for four decades. You may also note I didn’t say “going strong” because let’s face it, aside from snide snickering that comes with watching of the last four (Rocky III and forward) the films are a pretty mixed bag of 80’s excess. I actually never saw 2006’s Rocky Balboa but probably should if I’m going to drag it onto the Clubber Lang/Ivan Drago/Tommy Gunn films. Anyway. My point is, when news broke that up and coming filmmaker Ryan Coogler (Fruitvale Station, 2013) had chosen a new film taking place in the Rocky Balboa universe, I was intrigued but also a bit wary. Does the world need more Rocky movies? As it turns out my trepidation wasn’t necessarily unfounded but the revelatory and incredible result of Cooglers vision is Creed, one of the best films of the year.

What makes Creed so damned good is a combination of brilliant, assured filmmaking, character development and great acting. On the surface, Creed very much follows the pattern of the typical underdog story but Coogler is smart enough to know people will see through that and we’re lucky, otherwise Creed could become basically “a black Rocky movie.” And to be fair, it kind of is that and that’s totally o.k. when a film is this thrilling and well done. But Creed becomes more than “just a” film of any kind as Coogler creates a fantastic lead in young Adonis Creed realized perfectly by Michael B. Jordan.

When we meet young Adonis he’s in a group home where a fight has broken out with him in the middle. Even though he never met his father (Rocky’s nemisis turned best friend, Apollo Creed played by Carl Weathers), Adonis loves to fight and this isn’t his first scuffle. Yet this time he is visited by an unlikely savior in Mary Anne Creed (Phylicia Rashad) the widow of Apollo Creed but not Adonis’s mother. You do the math. Cut to later and Adonis, or Donnie Johnson as he now goes by, is brawling in a Tijuana amateur boxing match on the weekend before returning to his boring desk job unscathed come Monday. But we soon realize Donnie isn’t cut out for a life of boring paper pushing and he’s fighting with ghosts of his own, namely that of the father he never knew but who’s bloodline he shares, for better or worse. 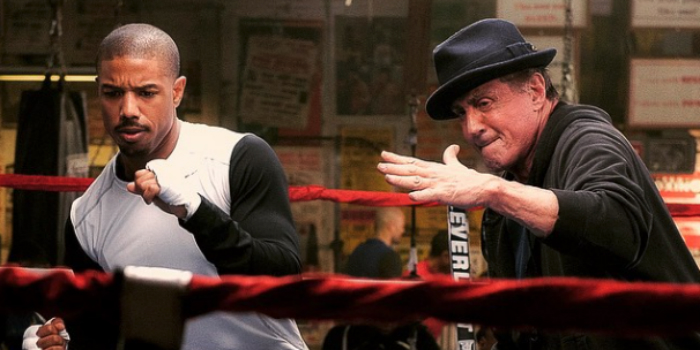 To be fair, the impetus for young Adonis to want to box and thus metaphorically know and best his father for whom he has abandonment issues doesn’t totally work up front. Luckily there’s way smarter writers than myself who tie this subplot in to the fairly epidemic issue of young fatherless black males. Plus, Jordan is just so damned likable that when he quits his job to seek out Rocky Balboa (Sylvester Stallone) to train him in Philadelphia, we are just along for the enjoyable albeit somewhat predictable ride. But predictability can also be managed well and Coogler does just that throughout.

Donnie quickly finds an aged Rocky who spends his days toddling around his restaurant, “Adrian’s,” and immediately refuses to train the eager and raw Donnie. But much in the way Jordan charms audiences with a relentless guile he soon too charms Rocky who takes the kid under his wing as a favor to his old pal Apollo. Again, what comes next is predictable but there’s two things that make the film work when the second act rolls out.

One is that people love training montages and you have to have at least one in a Rocky movie. Also, montages of training for a showdown, a team coming together or a character packing for a trip, adventure or war are just so engaging and satisfying. I don’t know what it is about them, but it’s true. There must be a psychological paper on this phenomenon out there and if not, you should write one. Not me, I’m too busy.

The second reason Creed doesn’t fall into the familiarity trap is Coogler (who co-wrote the screenplay) does a fantastic job fleshing out the characters and pacing of the film. Rocky never comes across as a sage wizard, instilling Donnie with knowledge he could never gain anywhere else. He just trains him and cares about him. He becomes a father to him like Mickey (Burgess Meredith) was to him, but this feels like more. His own son seems lost to him and all his friends have died. We soon realize Rocky needs Donnie too but it’s not handled in a clunky way but rather, an organic one. Adonis soon meets the lovely singer Bianca (Tessa Thompson) who is striving for goals of her own but also has a dark shadow chasing her. There are the boxers Adonis must face along the way, each imbued with a sort of evil tinge needed for a nemesis, but these are refreshing, updated ones. Then there’s Adonis himself who anchors the action around him by trying to become a real boxer to prove to himself – and the ghost of his father – who he really is which in many ways reflects Coogler trying to defeat the ever talked about “sophomore slump” for filmmakers who burst out of the gate with well regarded first features.

Creed works on every level: as a Rocky film, as a sports film, as a flat-out entertaining film. Stallone is simply outstanding reprising his old role and it’s a nice reminder that the man can indeed act (Rocky, Rocky II, Copland) and can be great when not parodying himself. Jordan is clearly one of our next great leading men as a kind of Matt Damon meets Will Smith personality who can do drama as well as thriller roles but the true star here is Ryan Coogler who has undeniable talent that we saw flashes of in Fruitvale Station.

There’s a quote Steve Jobs has that’s in both Walter Isaacson’s terrific book and the mediocre Danny Boyle film Jobs where Apple co-founder Steve Wozniak wonders aloud what exactly it is that Steve Jobs does. Jobs’ typically smug answer is that “he plays the orchestra” and that’s exactly what Coogler does here. He moves his chess pieces smartly around the cinematic board and is constantly, slowly upping the ante. He didn’t build the Rocky franchise, but he knows what makes it tick. Creed builds past the second act where Adonis must push himself to be better but when that third act hits Coogler brings it home in such a masterful fashion I genuinely feel bad for anyone who doesn’t get goosebumps. Coogler saves the best for last and as the curtain closes we’re left pumped up, moved and satisfied by the truly great, crowd-pleasing film. Creed is a must see for anyone older than twelve and will go down as a recent favorite for filmgoers for many years to come.