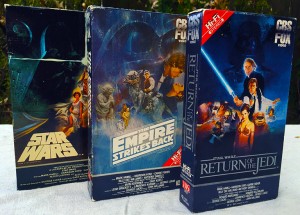 As we count down to The Force Awakens, there are a million think pieces across the interwebs about what Star Wars has meant to fans for the past four decades. Here at Flick Nation, the conversation has been a fun one as we recall toys, first-time viewing experiences, and the like.

But here is an enduring aspect of the Star Wars experience that people tend to forget about: how many times we have purchased the damn things! 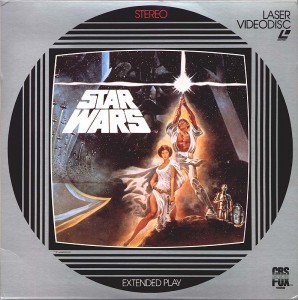 A few days ago, I hypothesized that one of the reasons why the original film’s images are seared into our subconscious is because we paid to see it time and time again in the theater between the original release May 1977 and the VHS release in the fall of 1982. The full trilogy saw staggered video releases until 1985. Of course, these were the pan-and-scan versions that revealed only about 60% of the original widescreen image. But that didn’t matter to fans who gobbled them up! Bonus: Star Wars was probably the movie that introduced casual viewers to the concept of letterboxed releases, because foreign releases were so much cooler.

And you would think after subsequent earrings on CBS, NBC and HBO that the hunger to purchase the original trilogy would have subsided. Obviously, you haven’t been paying attention, son! 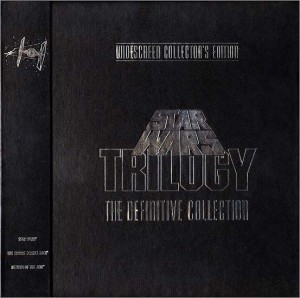 In 1990, Fox video released the Star Wars Trilogy in a special letterbox collector’s edition box set with a very 1990-esque hologram on the front. Two years later, came the Definitive Collection on LaserDisc, which is still considered the high mark release of the original unaltered trilogy. 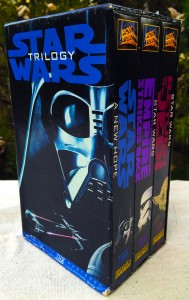 as one more cash grab in 1995 that was also the final VHS appearance of the original unaltered trilogy. The only reason to purchase them was for the new boxes.

Side note: my family owned a video store that I ran, and we stocked every release when they arrived, retiring the old covers into a big Star Wars box I still have. Wanna make me an offer?

Of course in 1997, A New Hope, The Empire Strikes Back and Return of the Jedi all returned to the big screen in spectacular fashion in Lucas-approved 20th anniversary Special Editions. People may grouse about them today, but they were a Big Deal at the time. In today’s dollars, A New Hope would have grossed about $250 million dollars at the domestic box office! 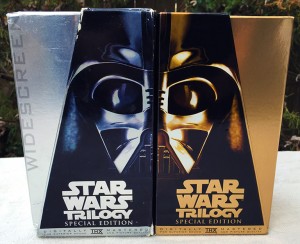 1997 was also the year that saw the birth of the DVD, but just to torture us, LucasFilm didn’t issue proper DVDs until 2004. Yes, they were the special editions and packed with a full disc of extras including an awesome documentary. But with that release came a ton of other well-documented changes. Because hey why not, you’re George Lucas. You can continue tweaking this thing until the cows come home! 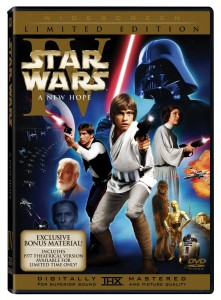 It’s not like fans stopped buying them, but the repeated purchasing allowed for the complaints to grow louder with each release. So much so that in 2006, LucasFilm and Fox relented and issued a very rare, special edition DVD release of the original unaltered films.

But they the way they did so was kind of dickish: you had to buy them separately and the films were not formatted for 16×9 screens, which were becoming the norm. The only way you could watch them was by zooming in to your 4×3 image which distorted the picture. Thanks guys!

To this day, fans are still clamoring for the Blu-ray release of the original unaltered trilogy. George Lucas claims that is impossible as the elements have been destroyed. I don’t know, ask the many fans who have created 1080p fan edits. 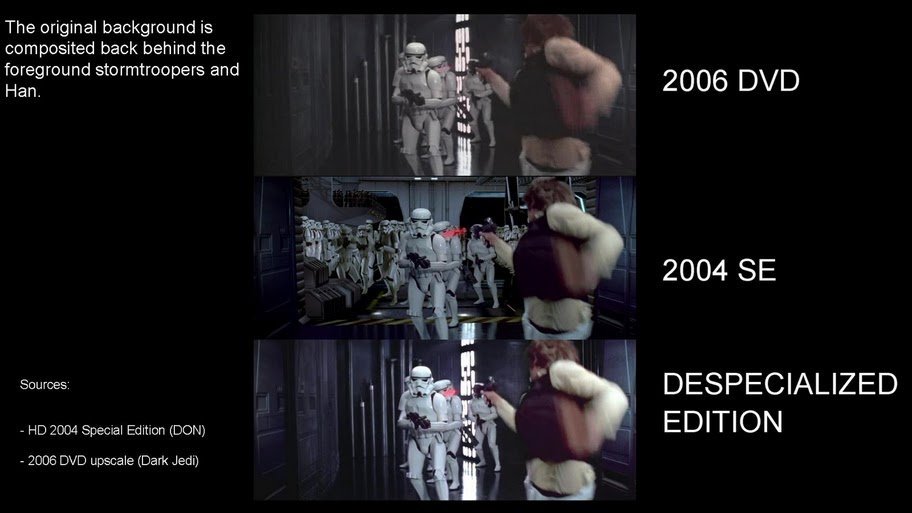 Where it goes from here will be interesting. It’s not like Disney is a company that likes to leave money on the table. If there is a way to repackage the films, they will – and you’d better believe that if there is a way to re-master the original cuts, that will happen. We’ve already seen the digital releases of the six films. but the reaction was muted.

How do you make something exciting again? Ask the folks in charge of the Bond catalog, which gets re-released every time there is a new film or noteworthy anniversary. 2017 was be Star Wars’ 40th anniversary and by then, we will have seen The Force Awakens, Episode VIII and Rogue One. Sounds like a primo time to drop some original cuts into a massive 4K box set, wouldn’t you agree?