Day Nine of the Flick Nation “12 Days of Star Wars” continues as Don boldly goes where no man, woman or child should ever have to go: he watches The Star Wars Holiday Special.

People love to razz “bad” Star Wars movies to a point where it’s beyond the norm. The whole geek cry of how the prequels “raped my childhood” is a pretty great example of that. While certainly not great, I don’’t think anyone was truly harmed by them let alone raped. But before the prequels, the main target of Star Wars fans mocking ire was the rare 1978 television show The Star Wars Holiday Special. Until now, I’d never seen it and for good reason.

First off, I’ve never been a fan of watching awful shows or movies because of the whole “so bad, it’s good” idea. There’s just not enough time in the day and typically, that stuff just annoys and bums me out. No one sets out to make a bad movie or show, things happen. The other thing that held me back is, it’s been very hard to find a copy as George Lucas famously disowned it and while stories vary, it’s been stricken from easy attainment and the only existing copies are on VHS or digitally updated VHS. There’s also nefarious ways to obtain this film but I borrowed a copy from a friend who I’m sure obtained it nefariously. But before you do that, let me juts say: you don’t ever need to watch the Star Wars Holiday Special as it is a truly terrible piece of crap that I was not only bored and annoyed by, but also shocked how it ever got made.

The show was a two-hour TV special for CBS that hit airwaves in November, 1978 and was only shown in it’s entirety once. The basic plot finds Han Solo and Chewbacca trying to get Chewie back home to his home planet of Kashyyyk to celebrate Life Day which is like Wookie Christmas. We discover this in a cold open then the action moves to Chewies home where his wife Malla, son Lumpy (not kidding) and Chewies dad Itchy (also not kidding) are awaiting Chewie’s arrival. From the time we enter the household (which looks like a half-assed TV stage from the 70’s) the Wookies all speak like Chewie to one another for a solid eight and a half minutes. Seriously. They growl, argue and sulk in growls and whines for nearly ten minutes. Then Luke Skywalker himself takes a phone call from Malla as she is worried Chewie isn’t home. 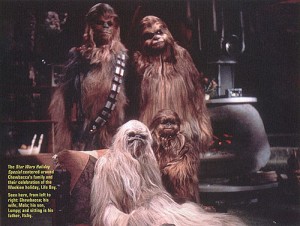 I’m not going to do a blow-by-blow account or plot rehashing of this show because not only is it not worth my time, it’s not worth yours. This show is an utter bore and complete disaster. Instead, I’ll bullet point some “highlights” and catch up with you at the end. 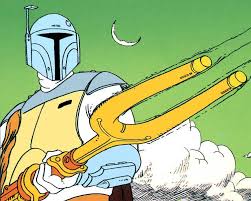 One cool thing is a cartoon young Lumpy watches where we meet Boba Fett for the first time. I dug the animation and it was interesting to see a fully realized Boba Fett being used in such a shitty show. This was years before Empire Strikes Back.

Did I mentioned The Star Wars Holiday Special is two freeking hours long?? It is. It’s awful and feels longer.

Again, I’m not the kind of guy who gets on a torch burning bandwagon to tear something down. If it’s bad, I usually skip it. But I’d never seen The Star Wars Holiday Special and a part of me though it couldn’t be that bad. I was wrong and I encourage you never to ever watch it. Don’t even hate watch it, it’s that bad.

But if you’re a Star Wars completest, or just won’t take our word for it, we’ve embedded it below for your viewing pleasure. Judge for yourself and let us know what you think!