I woke up this morning and drank my coffee out of my Star Wars cup. I showered and got dressed in my Millenium Falcom t-shirt. I put on my Empire Strikes Back vans and now I’m waiting for my brother-in-law to pick me up and take us to San Francisco to see Star Wars: The Force Awakens. We will be in line around 4 hours early, my and my fellow nerds. I am in full movie geek mode and couldn’t be more stoked. But this week has been difficult.

Many critics throughout the country have been seeing the film for the past few weeks but here in critic land, they have a thing called “an embargo.” That means you agree not to say ANYTHING about the film until a predetermined time. It’s an idiotic practice that is actually really unfair as it gives press control over critics and critics are journalists who should be free to write whatever the hell they want. But if you break embargo, you run the risk of being blacklisted and never getting invited to another press screening. There’s your “Inside Baseball” for today and I apologize for the digression. But I do have a point!

The embargo for Star Wars: The Force Awakens broke Monday at midnight and the fingers of millions of critics hit “PUBLISH!!!” at the exact same moment. Like the Death Star exploding in Star Wars, the detritus of opinions, spoilers and insight attacked the Internet all at once and that was when I stepped up my total media blackout. 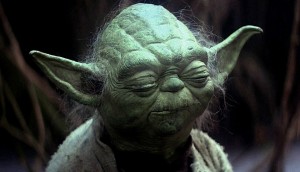 Know Nothing, I Will

I don’t want to know anything more about the film. All I do know is what’s been in the two American trailers. There’s apparently a Chinese trailer that has a major spoiler and I have no idea what that spoiler is as I have been averting my eyes to any new information for about two weeks. As a person who basically lives on the Internet and scans film sites all day, this is incredibly hard. Here’s how I do it.

If I’m scanning twitter and I see a photo of something that might be The Force Awakens, I immediately avert my eyes away and keep scrolling. If I see someone hashtagging #StarWars, I do the same thing. If I hear someone on TV or the radio start to say something about Star Wars, I close my eyes, turn my head, go LA-LA-LA-LA-LA-LA and change the channel. I do the same for people in real life (ask Dennis, my boss here at Flick Nation!). I know that sounds extreme but I don’t care. I don’t want anything ruining my experience as again, I think this might be the last big movie event ever. Or at least in my lifetime. And I’m excited.

I’ve also managed to temper my expectations a bit and just maintain a low hum of excitement. This is it. The time has come. I cannot wait.

Stay tuned here as I will try and give updates from the line and maybe an immediate reaction following the film!