Aside from Star Wars: The Force Awakens the movie I was most looking forward to at the end of 2015 was Quentin Tarantino’s eighth film, The Hateful Eight. Like most cinephiles, I love Tarantino and have loved every one of his films. And let us not forget this one almost didn’t happen after someone leaked the script back in 2014. Luckily QT cast aside his anger, put together a simply fantastic cast and got to work. Like many, I patiently waited for the film and even dedicated myself to seeing the “70mm Rolling Roadshow” of the film which I did last weekend so what I’d like to do is review the film then the roadshow. Sound good? Well, too bad.

Firstly, I don’t really think I liked the film but I’d be lying if I didn’t say it’s stuck with me both in terms of subject matter, characters and scenes. I really can’t get the film out of my head which speaks to something big, but I’m not quite sure what. I’m also completely thrilled the film has spawned so much polarization and conversation. I had a simply fantastic talk with a writer/director about artist growth and intent and conversations like that are what I live for. As a result of the intelligent discussion of the film I think one of my major issues is The Hateful Eight feels like a step-back in terms of filmmaking and storytelling by a writer/director I adore. I’m finding it hard to reconcile that the films a fairly meandering, sloppy and kind of vile stage play writ large on the big screen as bringing myself to that conclusion means Tarantino failed for the first time. That’s tough for me to swallow as a fan of the man.

The plot of the film concerns eight men and one woman (yes, that’s nine people) trapped inside a haberdashery (that’s not a haberdashery but really more of a bar) by a blizzard. The one woman present is the infamous outlaw Daisy Domergue (Jennifer Jason Leigh) who is being brought to a nearby city by a bounty hunter named John “The Hangman” Ruth (Kurt Russell) to, as you may have guessed it by his name, hang. There’s some other folks along for the ride but most importantly is Major Marquis Warren (Samuel L. Jackson) who is a highly decorated Civil War Major who, despite the results of the war, is still despised and looked down upon by white people. See, just because you win a war or force legislation on people, it doesn’t erase racism which is a kind of “no duh” plot point Tarantino seems to want to make here along with others. The point here is that Marquis is the only black fellow in the haberdashery and there’s a few nasty racists in the house as well. Tensions ensue. 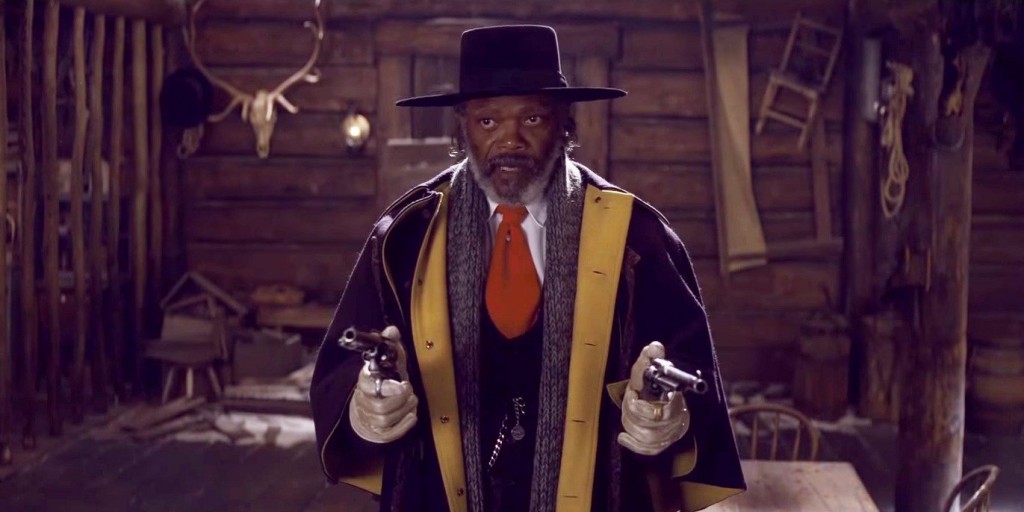 Without delving into spoiler territory it’s soon revealed that one of them men in the haberdashery is a liar and is not telling the truth about who he is nor about his reasons for being there. We discover this when John Ruth tells us exactly this. From there The Hateful Eight becomes a kind of murder-mystery/horror/western film and although I remain fairly nonplussed by the film overall, that’s an awesome genre mash-up, something Tarantino has basically perfected. But where the film falters for me is in the second half which is when a major plot point is revealed to viewers that just feels cheap. Almost akin to a story ending with “it was all a dream” in that the storyteller is dragging us along in a story of their making but withholding information as a way to bring on a big reveal that changes everything. Sure, that’s common practice for many films and books but somehow I felt ripped-off here and missed the clever subtlety so many other great narrative reveals handle better.

Many have griped about the abhorrent violence in The Hateful Eight and I can see their point as it serves no purpose other than cheap thrills. In almost all of Tarantino’s previous (and also uber-violent) films the violence is typically bloody but also kind of earned by the characters. Here, it seems to be done because it would look super cool and gross. And I have to admit, it does. As the first batch of blizzard hostages are dispatched, I laughed as much as I cringed which is the same feeling I felt when watching the ear removal scene in Reservoir Dogs or the bloody battle scene in Kill Bill: Volume One where The Bride takes out an entire Yakuza army. Onscreen violence can be fun and a great relief of tension but here it becomes a game of “who’s next and how bloody will it be” which again, feels lazy and cheap. While the acting and dialogue is typically (for Tarantino) wonderful and rich I still felt kind of unsatisfied by the film overall. As for the “70mm Rolling Roadshow” however… 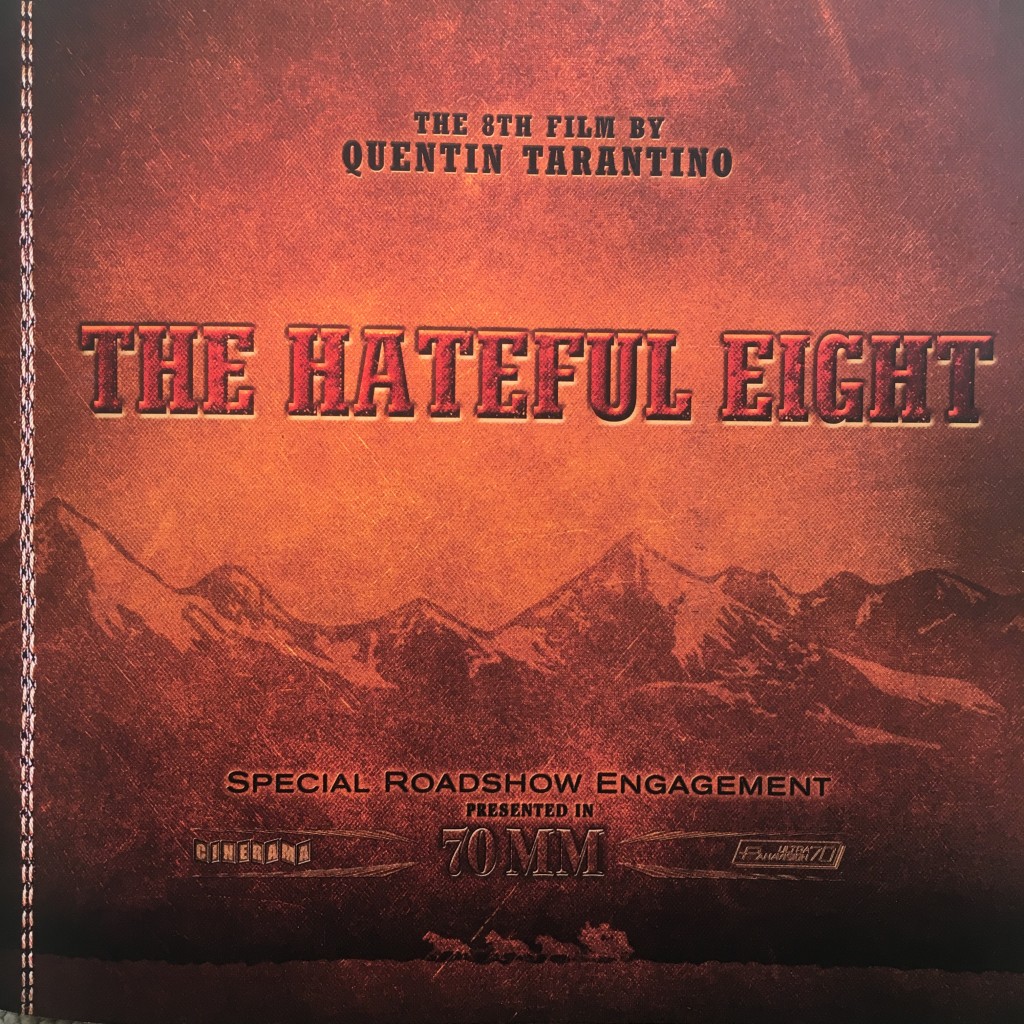 …it was fantastic. I saw the film at the glorious Grand Lake Theater in Oakland, CA and as we entered the grand old movie palace, we were handed a cool program for the film (pictured above). As we took our seats (just in time) the curtains closed and a blood red screen faded in behind it. As the curtains opened, a somber western song (likely by the films composer, the brilliant Ennio Morricone) played the words “overture” slowly faded in and the film began.

There’s been much consternation about the death of film and filmmakers like Tarantino have been firmly on the side of saving it, hence the 70mm projection here. And while there have been complaints that Tarantino is just being arrogant by shooting and displaying a film that takes place in basically one location instead of using a broader landscape, I find those issues just silly. The Hateful Eight shown in 70mm is a glory to behold and if anyone wants to know the difference between film and digital video, go see this film in 70mm and bask in the crisp, clear image that also has deep, rich colors and tones. It’s truly the best of both formats in that the mesmerizing flicker and deep colors of film are present but the image looks simply flawless. There was also a well-timed intermission in the film (both because action was ratcheting up and, I had to pee) which gave the entire roadshow a real “cinematic event” feeling. Cinema should be an event and I’m glad I saw The Hateful Eight in this format.

But again, the film itself didn’t do much for me. While the dialogue was typically stellar the attempts at commentary on power and race don’t come across as well as they do in other Tarantino films like Inglorious Basterds and Django Unchained. In those two films, we hear people talk about race and power but then there’s intense visual scenes that play into these conversations. For instance; the “mandingo” fight scene in Django Unchained takes place in a section of the movie where we’ve seen the subtle power struggle between Dr. King Schultz (Christoph Waltz), Calvin Candie (Leonardo DiCaprio) and Django Freeman (Jamie Foxx). These grown men being forced to fight to the death almost serves as a gut wrenching exclamation point on all the power struggles in the prior and subsequent scenes. Yet in Hateful Eight, there’s just a lot of talk and quick draw action. While definitely an entertaining film, I feel a bit let down by Tarantino’s eighth film.