Home » Featured » Everybody Wants Some!! (Review)

Everybody Wants Some!! (Review)

Everybody Wants Some!! is what happens when the evolved director of Boyhood and Before Midnight returns to gonzo Dazed and Confused territory. That’s not a knock on the latest film from Richard Linklater: his comedies have always been infused with a little more under the hood. 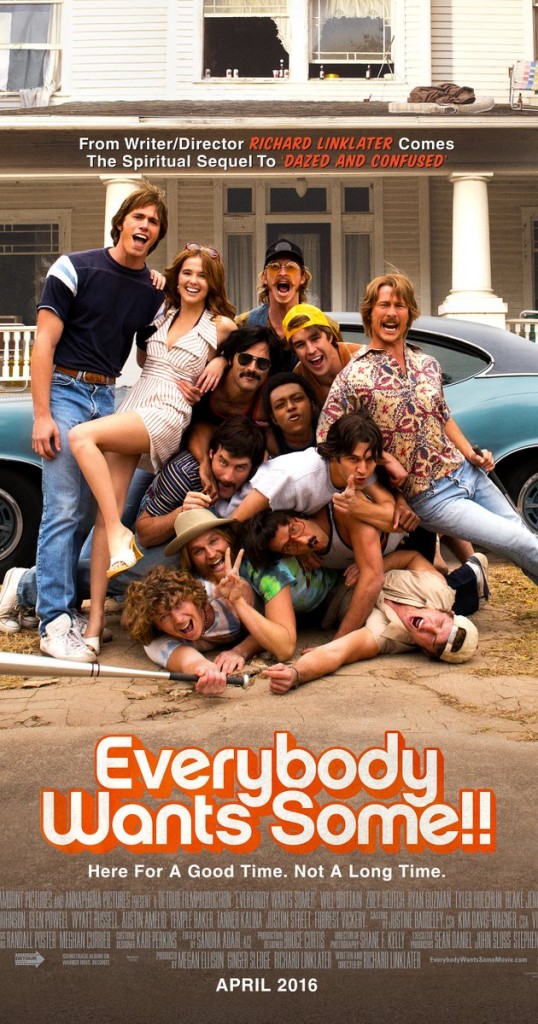 The “spiritual sequel” to Dazed indeed embraces the wild abandon of pot and booze-fueled shenanigans, complete with mild hazing, but there are moments that tap into the more primal themes from Linklater’s oeuvre. There’s a stoner monologue about finding high art in the notes in between the expected beats. It works as a goof on the way people dig deep when the world is open to them, just as it thematically supports everything Linklater has been saying through his characters for three decades.

And there is no more basic and predictable setting than a frat-type house in 1980, which is ground zero for our ensemble of baseball players all arriving the weekend before college. Jake (Blake Jenner) is our everyman, and according to Linklater, the natural extension of both Mitch, the baseball-loving freshman from Dazed, and Mason from Boyhood, who was entering college at that film’s finale.

Everybody Wants Some Takes a while to get going, and Linklater a while to find his groove. Some early scenes of the teammates and housemates getting to know each other play out with awkward beats. At first, they all sort of blend together into one unpleasant alpha male coterie of bad pickup lines and cruel taunting.

Worse, Linklater sets up a spectacular running joke with a second floor water bed and a buckling ceiling and never pays it off. 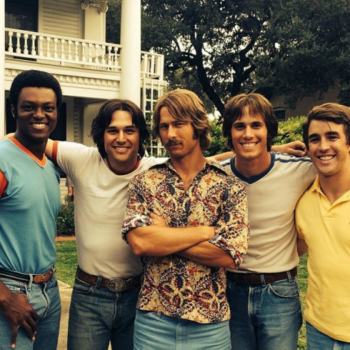 What would John Belushi think?

But by the end of the first act, the movie settles into a fizzy combination of strong (and very funny) character interactions, and some very specific music cues (although Foreigner’s “Urgent” wasn’t released until a year later), including an extended car ride rap-a-long to “Rapper’s Delight.” To be fair, it’s not “Bohemian Rhapsody” from Wayne’s World, but the sequence isn’t meant to funny so much as it’s meant to be real. You’ve all done this, and Linklater knows it.

By the way, if you duck out of the film before the credits are done, you’ll miss a music video that has the guys describing themselves in character as well as advancing the plot. Every movie should have one. Can you imagine a post-credit sequence from The Force Awakens with Kylo Ren rapping about his daddy issues? This must happen.

The plot, such as it is, counts down to the first day of college. There is a mandatory baseball practice on Sunday, but that leaves the rest of the time for competitive pickups, knuckle-flicking competitions, parties, and a fight or two. It’s worth noting that while some of the guys disappear into the mix, several standouts make indelible impressions. 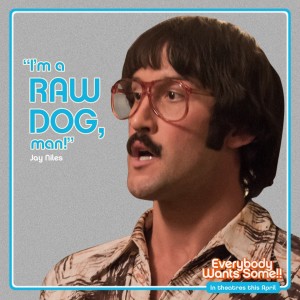 Juston Street just about steals the movie as Jay Niles, a wiry and uptight pitcher with a bowl haircut and mustache that makes him look like Weird Al Yankovic’s psychotic twin. He’s never seen explicitly doing mind-altering substances, so maybe the guy just acts like Scarface all the time.

Oh, and he calls himself “Raw Dog.” Either way, he injects a sense of danger because you never know if he’s going to get the rest of the guys shot.

The rest of the gang – and yes, that includes a “spiritual” successor to Matthew McConaughey’s Dazed and Confused character Wooderson – all form a sort of frat boy Greek chorus as Jake attempts to settle in. There is a sweet romance between him and Beverly (Zoey Deutch), and if the entire story arc exists for no other reason than to get the guys to the “Oz Party,” thrown by the actors and artists, it’s worth it.

If nothing else, Linklater’s movies are non-pretentious time machines that get so many of the small details right: slang, pop culture, the interpretation of said culture, wardrobe, and even politics. Yes, the beautiful thing about a movie about a bunch of young people is that they all have a lot on their minds – and Linklater’s unsung gift is having an ear for how people really sound.

Characters speak of the primal need to become oneself, and the skins we wear when trying to get laid – or how we’re not really that different from animals who change colors in pursuit of the same thing.

Yep, everybody wants some, alright. 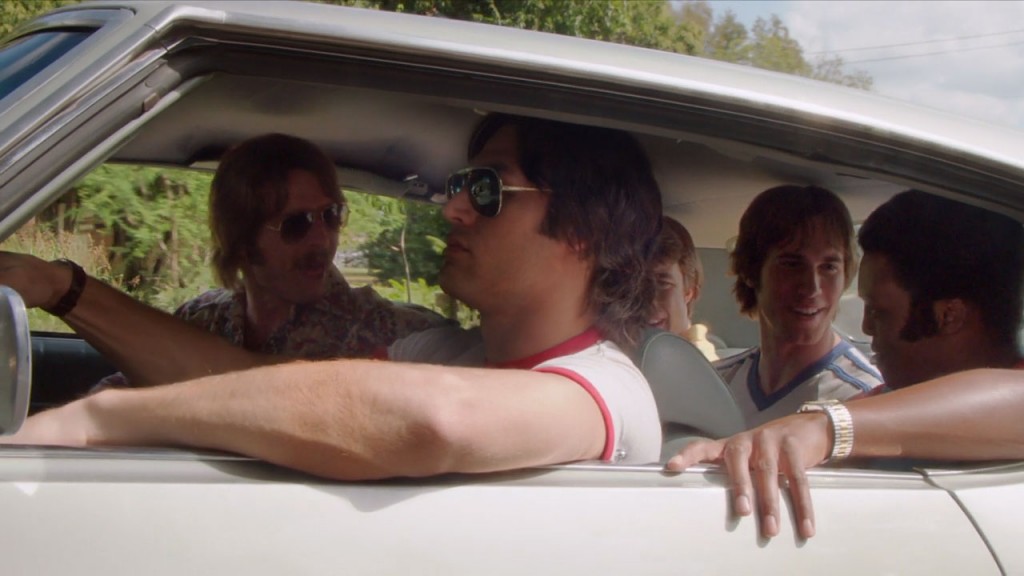 The only real problem lies in promoting it as a “spiritual sequel.” I’ll give it to the marketing department: it’s a catchy pitch. Both movies capture a moment in time, feature fantastic soundtracks, refer to Gilligan’s Island, and burst at the seams with largely unknown casts (at the time) able to embody youthful archetypes without the burden of typecasting. Remember, nobody knew who the hell McConaughey was when he first leered at high school girls.

But Dazed and Confused was more organic and ramshackle – maybe because it was a little scuzzier, a little more rough around the edges.  The inherent tensions were baked into the different stages of teenage life, from bullied 8th graders to those who still hang with the teens long after graduation. Here, everyone is in exactly the same place.

Everybody Wants Some is lensed and edited in Linklater’s more mature style with clean details and crisp colors. Removing the grain and the haze also washes away some of the nostalgia. And although the Sound Machine discotech was practically a character unto itself, only time will reveal if this coming of age opus becomes as beloved as Dazed, or more of a footnote like Suburbia.

Personally, I’m holding out for the Dazed and Confused high school reunion. 2018 will be 25 years. It could take place in 2001. Imagine the possibilities.