It’s almost impossible to consider Captain America: Civil War without the long shadow of Batman v Superman: Dawn of Justice. Yes, they are two separate films in two separate universes. But they must be compared not just for their close proximity to one another’s releases, but because they are extremely similar in intent. A cynical and heartbroken hero disapproves of another (more optimistic) hero’s philosophies to the degree that it causes a rift and allows evil to flourish. At least that’s what BvS was supposed to be. It’s fair to say that whatever lofty ambitions the much-maligned Zack Snyder film had, they were squandered for reasons already covered in detail.

Civil War has the luxury and depth of it’s own Marvel Cinematic Universe canon, a blessing and a curse. When these things curdle or become bloated machines – as they did in the most previous Avengers flick Age of Ultron – it’s easy to become bored with armies of CG creatures wreaking havoc on animated humans.

But as with Anthony and Joe Russo’s previous Captain America chapter The Winter Soldier, there are many shades of grey at play and that ambiguity, as well as a little psychological heft, is what lends Civil War its power. Tony Stark (Robert Downey Jr., still superb) is haunted by the death of his parents and the choices he’s made. He’s trying to do the right thing, both altruistically and as a mentor, but his demons won’t let him sleep. Side note: casting Mad Men’s John Slattery and his 70s stache as Tony’s industrialist papa Howard Stark was brilliant. 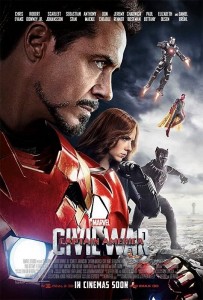 The Big Idea here isn’t an alien invader (thank the maker) but the idea that heroes unchecked are as dangerous as the bad guys. An early action sequence that ends with a poor decision and fatalities inspires the Slakovia Accords (named after the fictional country wiped out in Ultron), a decree signed by 117 nations that seemingly have forgotten about that time the Avengers saved the planet from inter-dimensional giant worms. But hey! That’s how democracy works. Once signed, the Avengers would operate as per the will of the United Nations, and guilt-ridden Stark agrees.

Of course, misplaced WWII hero Captain America/Steve Rogers (Chris Evans) feels differently. Also, his allegiance to his fallen and misunderstood frienemy Bucky Barnes (Sebastian Stan) makes it impossible for him to sign. Bucky’s been named the culprit in a recent, shocking attack and Cap thinks it’s all too convenient.

Critic Fail: it’s taken me this long to realize that Renner and Mackie first fought side-by-side in the Best Picture winner The Hurt Locker (2008). 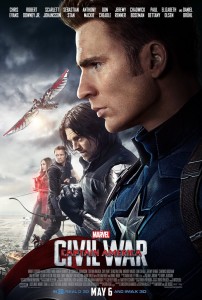 I won’t spoil any details because there are many joys to behold, but it all comes down to the big airport fight scene heavily teased in the trailer. And let me tell you, especially after the darkness and brooding of Batman v Superman, this is what a superhero smackdown looks like. With characters faithful to themselves, motivations solidly in check, and tongue firmly in cheek, this is a comic lover’s nirvana: Funny, thrilling, and surprising.

And did I mention Spider-Man is there too? Considering Sony’s long-contentious relationship with Marvel and diminishing results for it’s own Spidey flicks, it’s almost mind-boggling that this even happened. Tom Holland creates a spot-on Peter Parker. His Spidey is sarcastic, clever, and vulnerable. It also makes perfect sense that Tony Stark is his mentor. Thankfully, we don’t have to endure his origin story anymore, but there is the issue of elderly Aunt May now being played by smokin’ hot Marisa Tomei.

Oddly, even though the movie is called Captain America, the most important character journey belongs to Tony Stark. Downey is subtle at times, arrogant at others, always imbuing Tony with a streak of fairness that cuts through his wildly inappropriate personality. When things get emotionally heavy, Downey delivers. For as much as the actor tries to parlay his Iron Man box office into Oscar-bait roles, he’s really doing the best work of his career in these.

To pick a few nits: the Russo Brothers lay the action on a little thick in the first act. The action is so kinetic, it almost reminded me of Hardcore Harry, the ridiculous first person action film that came and went. Once the movie settles down, it comes alive beautifully. As is often the case with Marvel adaptations, some of the most thrilling scenes are when the heroes are without their weapons or costumes.

A word to the casual moviegoer: you can’t have just seen previous Captain America films. You have to be versed in the past few MCU movies to know what the hell is going on.

Also, keep in mind there are two post-credit sequences. One happens about halfway into the credits, and the other one happens at the very end. Neither one is earth shaking, but both are very satisfying. Marvel is also confident enough to never have these movies end with a pretty bow on top. They always leave us wondering what’s going to happen next, and if nothing else, that’s what an interconnected series is all about.

Also worth noting: At no time is a life-changing, world-altering decision made because two characters’ mothers have the same name. 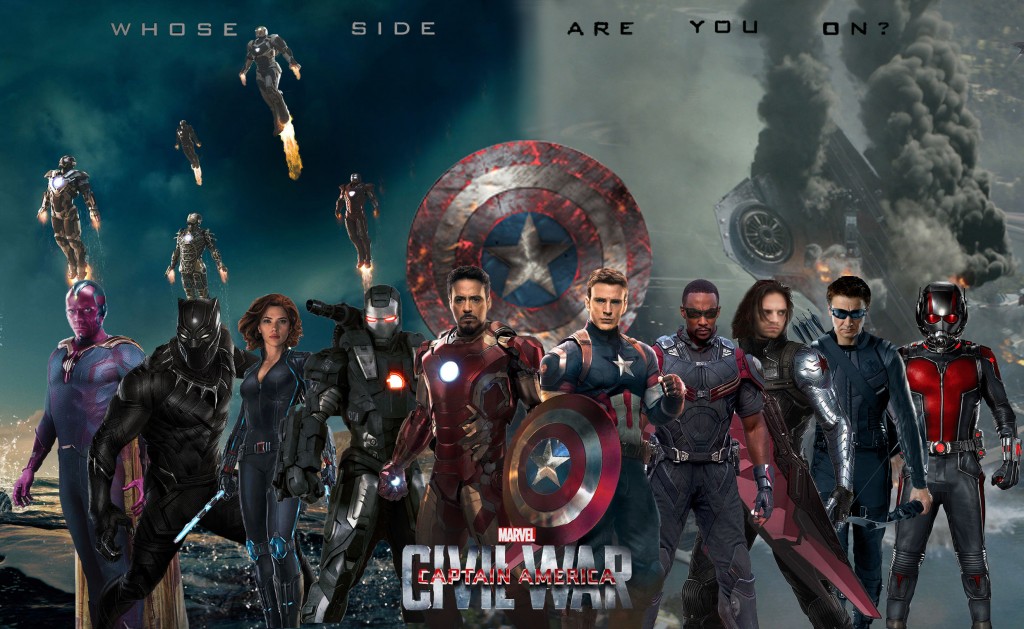