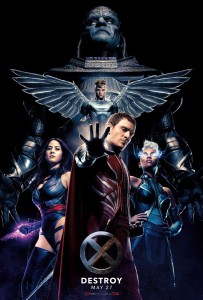 Once Upon a Time, the X-Men movies were about what it meant to be human.

Those were the heady days of X-Men (2000) and X-Men United (2003). And even though Bryan Singer also directed those early films, I’m sad to report there is barely anything resembling human behavior in Singer’s unpteenth sequel X-Men: Apocalypse.

I get it. Kids today want more explosions and CGI with their premium 3D admission. But the X-Men, at their best, have always been analogous to other aspects of the human condition. That is why the comics and the early films resonated so strongly with fans. Guided by heavyweights such as Patrick Stewart (Professor X) and Ian McKellan (Magneto), one got the sense that these frenemies had a lot of road behind them.

And even though these new films are doing their damnedest to create the same dynamic between James McAvoy and Michael Fassbender in the same roles, the scattered pacing and over-reliance on FX-driven mayhem fail their strong performances. Once my mind started wandering, I spent a good deal of the film trying to mentally connect the 20 years of screen-time that have passed between X-Men: First Class (2011) and this one, and the 20 years it will take to get to the Patrick Stewart era.

And yet, there is Wolverine (Hugh Jackman) with another scene-stealing nonsensical appearance that has nothing to do with anything except the fact that he is Hugh Jackman playing Wolverine. That’s the problem with Apocalypse. It’s all sound and fury with very little meaning.

I didn’t like Future Past either. It was a bold idea getting both full casts together but in the end, it felt bloated and rushed at the same time. But … BUT … it was the highest grossing X-Men flick to date, which is why we find ourselves here, only with more explosions. Granted, this sixth entry – or is it the eighth? – is more streamlined in that we are only following one cast of mutants but I still needed a flowchart to keep everybody straight. 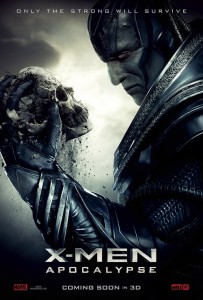 The movie is named after Apocalypse (poor Oscar Isaac, buried under absurd makeup) – the first mutant – who ruled as a god 5000 years ago and has been awakened to reclaim his place as The Ultimate Power. But there is a fundamental problem with a villain who’s basically omnipotent: there is no logical way for even the most powerful mutants to exploit that weakness.

You know it’s going to come down to some unforeseen loophole that has nothing to do with anything as much as it has to do with bad luck. And that’s not a case of heroes winning the day so much as screenwriters lazily unpainting themselves from a corner. Regarding the global destruction, beyond a certain point, it’s hard to care. It’s the Man of Steel effect. Too much really is too much. You think humans had a right to be mad at Superman after all the destruction in Steel? The level of destruction here does not bode well for future human/mutant relations.

Oh, and what’s the point of setting it in 1983, aside from a montage set to a Eurythmics song? Where was the wall-to-wall 80s soundtrack used ironically? Aside from Jennifer Lawrence’s hair, Nightcrawler’s Thriller jacket and a picture of Ronald Reagan, setting it in the 80s is pointless. Cute joke about how “third movies are always the worst ones,” but they may regret including that line.

Fassbender, McAvoy and Lawrence can be very compelling in these roles, but once all the FX kicks in, it becomes a storm of whizzing energy, crumbling buildings and actors screaming into wind machines. But hey, at least we know how Professor X went bald now. 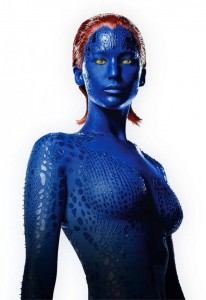 Lawrence doesn’t play a shape-shifting blue mutant so much anymore as she plays Jennifer Lawrence. When Rebecca Romajn played the same role, she committed with blue body paint and creative angles hiding her girl parts. Not only is Lawrence considerably more covered up, she clearly played the movie star card so she didn’t have to be slathered with all that blue shit anymore. Or maybe the producers just wanted more Jennifer Lawrence onscreen. Either scenario is possible.

I rather enjoyed Matthew Vaughn’s prequel reboot First Class, which created a compelling narrative that connected Charles Xavier / Professor X (McAvoy), Raven / Mystique (Lawrence) and Erik Lehnsherr / Magneto (Fassbender). That one was a grounded, human film that explored the blessings and curses of mutant abilities and the responsibility one has when touched with said power. I remember more about Vaughn’s movie from 2011 than I do this film, and I just walked out of it.

To be fair, Fassbender has a few really strong scenes and Olivia Munn checks both the “sexy” and “badass” boxes.

What the hell happened to Singer? As the soulful voice behind the first two films and with Vaughn’s equally elegant First Class building on Singer’s themes, it’s as if he stopped looking up to Steven Spielberg and started worshiping the cinematic stylings of Zack Snyder instead. 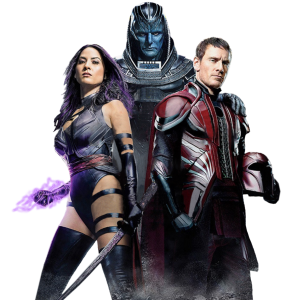 Remember how the previous film Days of Future Past managed to create an ending so tidy that it completely nullified every previous X-Men film, including the Wolverine spin-offs? Writer Simon Kinberg (working off a story written by Bryan Singer, Kinberg, Michael Dougherty and Dan Harris) does the same thing here.

It’s bad enough when a beloved brick and stone building is blown to bits and the last-minute rescue of its occupants is treated as an extended joke. It’s worse when mutant magic puts the pieces together again. It would have been more believable if they just had Superman fly backwards and wind back time.

They’ve already announced the next film will take place in the 90s.

My prediction: Somehow, the Earth will be restored to perfection by then, there will still be some vague darkness in Fassbender and underlying distrust for mutants. And all the students at Charles Xavier’s School for the Gifted will be wearing plaid. Would it be too much to ask that we get a nice scuzzy grunge soundtrack to distract us from whatever the big threat will be? And where do you go after battling a god?

A little Pearl Jam and Nirvana would go a long way.