West of Her (Review)

Home » Featured » West of Her (Review) 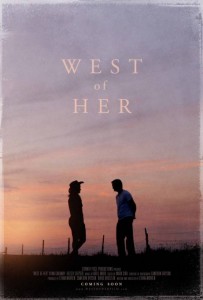 Writer-director Ethan Warren’s graceful two-hander pairs a nervous loner with no human footprint with a mysterious woman on a unique journey. They both “work” for someone or something distributing intricate tiles with inspirational quotes. The tiles are small enough to carry and assemble, but large enough to be noticed once permanently adhered to a sidewalk, street or parking lot.

What it all means is not the point. That Dan (Ryan Caraway) and Jane (Kelsey Siepser) have found each other is. Paired anonymously, it doesn’t take long for them to begin flirting, and sharing tidbits about each other’s life. She wants to know why he yearns to be part of something bigger. He’s convinced that she’s not being completely honest with him – about the job, her identity, everything.

Gradually, personal backstories emerge as the pair travels across the country, bathed against widescreen vistas and gorgeous lighting. Both have long stage-worthy monologues that might test the patience of anyone waiting for a traditional beat, of which there are none. This is the classic American road film by way of Terrence Mallick.

Siepser is a revelation. Dazzlingly beautiful and radiating warmth and intelligence that belies a past filled with regret, she is the live wire that awakens poor hapless Dan from his hibernation. Once Siepser exits the film, her departure is felt immediately as are Jane’s lingering effects.

Caraway is frustratingly withdrawn, but reveals more to the camera than he does to anybody in the film. He has nothing, he is nothing. He is death to Siepser’s life – and the dance is something to behold.

Warren’s dialogue spills out like puzzle pieces – references to empty promises, truth, and secrets, and yes, puzzle pieces, are casually spoken, only to double back carrying the various themes on their shoulders.

West of Her has become a film festival darling and it’s easy to see why. Warren’s confident direction and command of visual storytelling – enhanced by expert sound design, cinematography and editing – is impressive. It’s also an American travelogue, shot on location over a stretch of 4,000 miles. 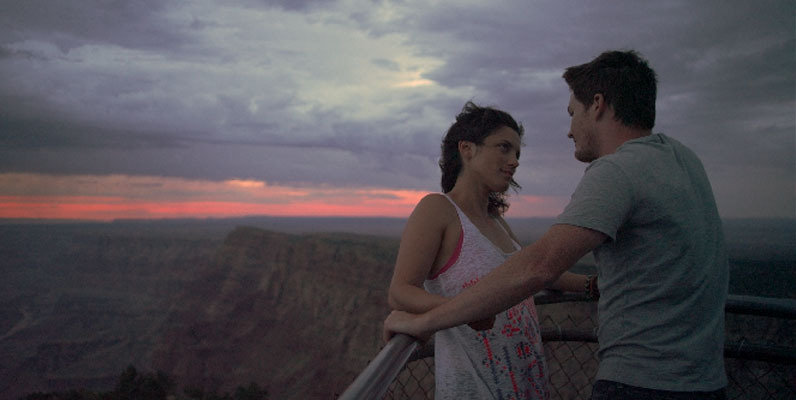 The tiles are based on the real-life Toynbee Tiles that started popping up in major cities in the late 1980s. To this day, their origin is a mystery, but one can only imagine couriers such as Jane and Dan hired for such a job.

The primal themes of emotional survival and the personalities we wear to insulate ourselves from regret and despair are not easily conveyed without bending toward convention. West of Her will have none of that. It answers just about nothing, but casually directs you to find what you need in the margins.

It’s all there, the film tells us. You just have to reach for it.