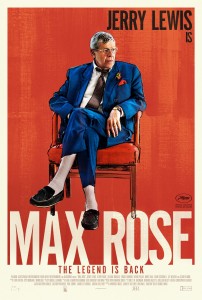 Sometimes you can sum up a movie’s existence to it being another chapter in a franchise.  Other times, it is a passion project willed into existence from a filmmaker who clearly has something to say. A movie like Max Rose is a beguiling little creature because you cannot accuse it of being cynical, nor can you say that it was made with anything but love.

However, it’s impossible to watch the film and consider the powerful performance from Jerry Lewis as anything but an award-bait victory lap. But to be fair, lesser performances have won Academy Awards.

Lewis swings for the fences as an 87-year old jazz pianist reeling from the recent death of his wife of 65 years. But wait, there’s more: Days before her passing, Max gets wind of a possible indiscretion his beloved artist wife Eva had while he was away at a recording session way back in 1959.

Did Max’s career as a pianist suffer because of some sort of emotional neutering? Is he chilly toward his grown son Christopher (Kevin Pollak) because he suspect the kid wasn’t his? Nope, nothing that interesting is broached.

Max spends his days in their cluttered, empty house poring over scraps of paper. Lewis is best in these desperate, silent moments, reconsidering an entire life’s worth of memories while looking for answers. Clues pile up, but not every question is answered.

He has a close relationship with Annie (Kerry Bishé), his grown granddaughter, whom he clearly adores. But just as her father Christopher has had difficulties keeping wives, she has abandoned her own relationship in Chicago to care for Max and find another life closer to home. Max might not know the truth about his relationship, but he can spot a destructive pattern a mile away.

Writer-director Daniel Noah hangs everything on Lewis’ hangdog performance, and that’s not the wrong call. But it would have been nice of the story was as developed. Contrivances stack up, allowing Max a very easy path to discovering the identity of his wife’s alleged paramour, making the middle stretch of the film a bit of an eye-roller.

But once Lewis and Dean Stockwell meet face to face, the film becomes a powerful rumination on unrequited love and regret. What begins in an explosive way turns into a tender understanding between two men experiencing the same loss.

The coda is predictable, but no less effective. Max’s final scenes with his adult children are moments that the entire movie has been building toward, and they soar. And what’s wrong with a cliched finale? There is a scene in the midsection that finds Max bonding with a bunch of old timers (Mort Sahl, Lee Weaver and Rance Howard) over jazz music, and the message is clear. There’s no school like the old school.

Speaking of old, much has been made about the fact that Lewis’ last performance was twenty years prior, in Funny Bones (1995). But look closer and you’ll see Max Rose was completed and first screened at the Cannes Film Festival in 2013 – a full three and a half years before being released commercially.

Now, there’s a mystery to solve.