In the opening moments of Godzilla Resurgence (aka Shin Godzilla), an underwater event causes a the Tokyo-Bay sewage line to be destroyed, followed by rushed, hushed meetings among the Tokyo elite. Flights are grounded, evacuations are organized.

The sequence is crisp and has the gravitas of a classy disaster movie. But then a young diplomat says the one thing we’re all thinking. That’s no volcano … it’s a large creature underwater!

In fact, it’s the 29th Godzilla movie produced by Toho and the studio’s third reboot.

By this point, the beats are so familiar that the only way to keep them fresh are to integrate elements of social media and shakycam that evoke raw YouTube footage. And yes, when combined with scenes of solemn, scrambling city officials and engineers grappling with the global political and social economic fallout, this ‘Zilla flick seems fresher than the most recent attempts.

But since it’s a reboot, it’s also an origin story of sorts. This isn’t the big guy who had the swagger and the skills to take on the likes of Mothra and Mechagodzilla. The first time we meet Godzilla here, he is a (monster-sized) baby kaiju burrowing his way through densely-populated towns on his way toward Tokyo, all the while resembling a rabid turkey.

The US sends a special envoy, Kayoko Ann Patterson (Satomi Ishihara), to dispense important plot details. The pristine yacht discovered in the opening sequence belonged to a disgraced zoology professor who had been studying mutations due to radioactive contamination. He even named the creature Godzilla. The US had been sitting on this secret for years, yet another in a series of tough predicaments coming from the west.

Did you catch that? Die-hard Godzilla fans tend to really dislike the US versions, and this Toho reboot was either inspired by or a response to Legendary’s 2014 redux. Here, the Americans have made Tokyo’s troubles worse. Kayoko pushes for a US-Japan coalition. Is this the beginning of the cultural sharing of this iconic creature? It’s that, or one hell of an insult.

The original 1954 classic Godzilla was a cautionary tale about messing with radiation, and there is an element of that commentary here. Much discussion is given to Godzilla’s radioactive footprint with the kind of thermal maps that appear in scary Facebook memes.

That’s how we know not to laugh when the big guy pauses his nighttime attack on Tokyo to barf up some purple radiation set to sad choir music on the soundtrack.

He lays some pretty hasty waste to the city in a sequence that would be among the more beautiful and haunting in the Godzilla canon. It’s still the depiction of a big rubber thing unhinging his jaw and releasing purple holy hell so I suppose your perspective will depend on how seriously you treat the material. Is it a cheat that Godzilla can now fire lasers in every direction from his fins and tail? There are hardcore Godzilla fans way better equipped to answer that question than me. 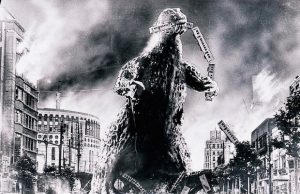 Godzilla Resurgence isn’t interested in having any fun. Much of the dialogue concerns the global political ramifications of how to deal with the monster, the most salient plot point being the intent to nuke the hibernating kaiju before he wakes. The movie spends a full half hour debating and preparing for the nuclear bombing. But in the end, the solution is so low-tech, it’s kind of inspired.

The finale tells us that the fight is not over yet and that the world must “co-exist with Gojira.” I’m okay with that.

As dismissive as this review sounded, I was the kid who would race home from school because Channel 7 was running a Godzilla movie at 3:30. I remember watching the big guy try to teach his son Minilla how to breath fire, but the kid only blew smoke rings. I had the Mattel Godzilla with the fire tongue and stumpy tail.

And I still believe that “Godzilla” is the most memorable song Blue Oyster Cult ever recorded.

So can we have a little fun?