Battle of the Sexes (Review)

Battle Of The Sexes tells the wild true life story of when reining feminist tennis legend Billie Jean King accepted a $100,000 Challenge from male chauvinist champ Bobby Riggs, an outrageous event that was carried on prime-time TV to an audience of 90 million viewers. It was the epitome of 1970s sports entertainment in which the splashiness of the event itself was bigger than the actual competition.

But it was about so much more.

As much as the trailers for the film promise a rollicking good time, it’s worth noting that directors Jonathan Dayton and Valerie Faris take a more grounded approach with just about everything.

Yes, Bobby Riggs (Steve Carell) is a larger than life self-made hustler addicted to the role of the dice. But at times, he’s also a sad sack who is acutely aware that everyone has grown tired of his schtick. His pampered rich wife (Elizabeth Shue) looks upon him as if someone swapped out her husband with a toddler.

On the other hand, 29-year-old Billie Jean King (Emma Stone) is already a legend, and a member of the co-ed USLTA at a time when women’s leagues were becoming more commonplace. Billie Jean draws a line when she learns that the winnings of male tennis players are set at eight times that of the women. So, led by Gladys Heldman (Sarah Silverman, who steals every line), Billie Jean forms a new league that would ultimately become the Women’s Tennis association, and that now makes them the competition.

As if that wasn’t enough to juggle, the happily-married Billie Jean suddenly finds herself inexplicably attracted to Marilyn Barnett (Andrea Riseborough), the team’s hairdresser. Watching Stone try to internally make sense of these burgeoning feelings and emotions is to watch an actor at the top of their game.

But being 1973, and a male-dominated world anchored by old-fashioned worldviews, even a whisper campaign would be enough to destroy King’s life and career. It would also wipe out the league’s sponsorship as well.

The movie posits that King isn’t the only character living an inauthentic life. Wimbledon champ Bobby Riggs – 55-years-old, his best years behind him, is stuck at a desk job working for his millionaire wife’s father when not attending Gamblers Anonymous meetings. But like Rocky Balboa, he still has fire in the tank, and playing his rich buddies isn’t scratching the itch.

He hatches a plan to come out of retirement with an outrageous stunt: he will prove male dominance in an exhibition match dubbed the “battle of the sexes” with the reigning female tennis champ, whomever that might be. In one of the funnier lines, he tells the press he’s putting the “show” back in chauvinism. 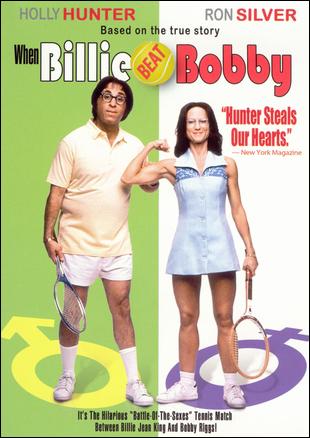 The match, and it’s famous outcome, have been well documented. This isn’t even the first cinematic telling of this tale. More about that later.

This 2017 model has a lot to juggle, not the least of which a good number of characters, all pleasantly fleshed-out and treated with a modicum of respect. I mean, let’s be real here. This could have starred Will Farrell and Amy Schumer, and been played for broad yucks.

Bill Pullman is outstanding as Jack Kramer, the former tennis superstar and USLTA bigwig clinging tenaciously to his chauvinistic worldview. Emma Stone won the Oscar for La La Land but I think it’s fair to say that she is better here.

Kudos to the technical team for such a lively and realistic depiction of 1973 fashion, tech and culture. It was also a nice surprise to see Howard Cosell as a supporting character. Even though there was computer trickery involved, it’s never as egregious as when Rogue One resurrected Peter Cushing.

By the way, this isn’t the first time this tale has been documented. In 2001, ABC aired a film called When Billie Beat Bobby, with Holly Hunter and Ron Silver, respectively. Hunter was nominated for an Emmy, but Silver looks like Austin Powers’ twin brother.

Then, in 2013, came Battle of the Sexes, the documentary.

In the end, Battle of the Sexes is an entertaining, illuminating, and at times very funny sports movie with a lot on its mind. It’s tough not to watch this movie and not realize how perfectly timed it is.

In the year of #resist marches, Wonder Woman and a female Doctor Who, it’s absolutely fitting that we now have a cinematic real-life hero that fought for equality when it seemed like an outrageous idea, played by one of our most popular stars.

Emma Stone has an Oscar, swung with Spider-man and danced with Ryan Gosling. But this is so much cooler, isn’t it?