Let’s just get this first order of business out of the way; Ant-Man is kind of a lame superhero. I feel safe saying that not only because it’s true but also because unlike some comic book properties, I don’t see a huge swarm of Ant-Man aficionados coming after me for that negative comment because really, there’s not many. Yes, I know he is a classic Marvel character. Yes, I know he was a leading figure in terms of comics becoming more gritty and true-to-life when his alter ego Hank Pym smacked around his wife, Janet. He’s also a man who can turn into the size of an ant and that’s a neat, but kind of silly gimmick or “super power.” He also gains super-human strength when he minimizes and to further drive home the goofiness factor, he can talk to and control ants with his mind. C’mon.

But the big screen version of Ant-Man seems to know this is a tricky subject to bring to the big screen and as such, there’s almost a winking nod to the silliness throughout the film and it doesn’t take itself too seriously. This is a good thing because if the film would have tried to be self-serious, I just don’t know how it could have worked. As it is now, I enjoyed Ant-Man even if it’s a fun little trifle of a film. 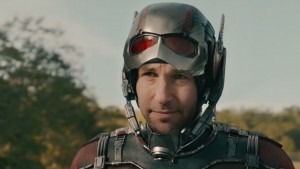 As the film starts we meet Scott Lang (Paul Rudd), a nice guy and apparent parkour enthusiast who shows us he can take a punch in a weird prison scene where he’s fighting a fellow inmate as some kind of rite of passage. This part is pretty expository and almost feels truncated and out of step but other than that, the plot and script for the rest of the film are pretty air-tight. More on that later. So, Lang gets out of prison and we learn he was there because he did a kind of E-Robin Hood thing wherein he found a billionaire corporation that had bilked people out of their hard earned dough, broke into their unbreakable computer network and gave the money back to the people. We also learn that this is just his latest arrest as Lang is also a cat burglar par excellence but must have crossed a black cat at some point as he frequently gets caught. This string of busts has cost him his pride and worse, his young daughter Cassie (Abby Ryder Fortson) who is living with her mom, Maggie (the always underutilized Judy Greer) and her new hardass fiance Paxton (Bobby Cannavale) who, conveniently is also a San Francisco police officer.

Upon getting out of the hoosegow, Lang vows to best friend Luis (Michael Pena) that he’s going straight but after losing a low paying job due to his criminal record, Lang decides to pull one last heist so he can rent his own apartment and see his daughter in shared custody. Thus, Lang and his compatriots decide to rob an old safe in an old house but when they do (or better, Lang does) there’s nothing there but a weird old leather suit and helmet. Lang takes it anyway and, as you may have guessed, it’s a suit that when activated makes the wearer into an Ant-Man.

Long story short, the originator of the suit is one Hank Pym (Michael Douglas), a scientist and the original Ant-Man. Through some unlikely but funny script gymnastics, it turns out Pym’s looking for a protege to carry on the tradition and also wants someone with sticky fingers as his protege in the science side of things, Darren Cross (Corey Stoll), is about to make public Pym’s secret shrinking sauce and this, much like fine fellows who made the first atomic bomb, will cause mass chaos for the world. Pym wants Lang to steal the formula but the only way to do it is as Ant-Man. After some convincing, Lang is in and this doesn’t sit well with Pym’s somewhat estranged daughter Hope (Evangeline Lilly) who is also a scientist as well as a well trained fighter (don’t ask) who feels she should be the one to don the suit and take care of business. 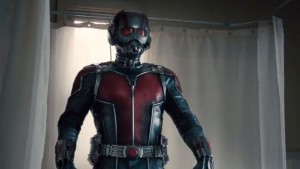 So, that’s the better part of the plot without any big spoilers and again, I enjoyed this film. Admittedly I have a very difficult time disliking anything with Paul Rudd in it (I even love This is 40) so I was a pretty easy mark. Yet what I also liked about this film is that much like Guardians of the Galaxy, Ant-Man seems to exist on its own and isn’t some cog in the world-building Marvel machine. I mean, it doesn’t feel like it is even though it has to be because all Marvel movies are interconnected and even though there’s a cameo from another Marvel hero (a low ranking one, but still) Ant-Man feels like it’s kind of free from all the Marvel inter-connectivity shenanigans. It stands on its own merit.

And also important, the film is light and fun, it’s not trying to be more than it is which is a simple little heist film. But what elevates Ant-Man more is the Lang backstory and I found myself really rooting for the guy to get his daughter back. This is intriguing because even though the shrinking formula could fall into the wrong hands and cause a huge mess, that stake isn’t writ nearly as large as Lang trying to do right by his kid, even if it is through the committing of a crime.

I also should add something I don’t typically like to add but feel I can get away with it here due to the end result of the finished film. Like almost any film geek out there, the news that Edgar Wright was going to originally direct Ant-Man was thrilling. Although his replacement, Peyton Reed (Yes Man, The Break Up) has a pretty iffy track record, he does a nice job here. But he’s also working off portions of the script that were leftover when Wright and his collaborator Joe Cornish (Attack the Block) bailed and those fingerprints are all over this film, particularly in the third act which I felt was the strongest and most vibrant. I typically don’t like to play the “what if?” game when it comes to wondering what a film would’ve been like if so and so directed it or such and such starred, but it was hard for me to disassociate the fact that Wright was once the man in charge and wonder throughout how different this film could have been when it still maintains his sense of energetic fun.

All that aside, Ant-Man is solid summer entertainment. I really found myself caring for the characters and wanting them to succeed. And not just Rudd as Lang. I was also interested in the strange love/hate triangle between Hank Pym and his daughter and former partner Cross, both of whom want Pym’s love so badly but his inability to open himself up to them both angers as well as motivates them albeit in very different ways. And not only is that an interesting dynamic, it is played out very well with an intriguing backstory that adds even more depth to what could have easily been surface level characters.