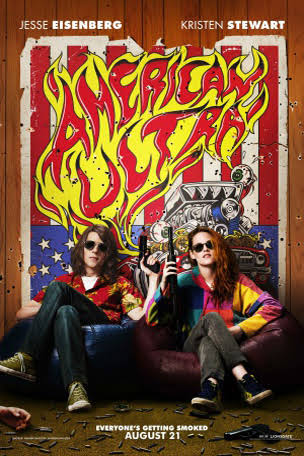 American Ultra is the latest in a line of stoner movies, which have a not-so-long and not-so-grand tradition. Back in the 1930s, Reefer Madness attempted to warn viewers away from the “dangers” of smoking pot (you’ll turn into a crazed demon!) but in the 1960s, that movie became a hilarious cult classic for smokers to watch and enjoy while partaking. Cheech (Marin) and (Tommy) Chong had a huge hit with Up in Smoke (1978), despite the turned-up noses of the cultured. And, despite whatever else Fast Times at Ridgemont High (1982) had to say, pizza-loving pothead Jeff Spicoli (Sean Penn) was everyone’s favorite.

Richard Linklater’s Dazed and Confused (1993) was one of the more respected entries in this sub-genre, viewing pot-smoking through the distance of a couple of decades, but it became adopted as a cult film anyway. Since then, the Harold and Kumar trilogy, Ice Cube’s Friday, Dave Chappelle’s Half-Baked, Kevin Smith’s movies, Smiley Face, Pineapple Express (and almost any Seth Rogen movie), Ted, and — of course — The Big Lebowski have furthered the tradition. I think that what most of these movies have in common is that they were outsider movies, initially scorned and written off by the mainstream before being discovered and embraced by those red-eyed outcasts.

American Ultra may be the exception to the rule. A couple of early posters simply showed the heads of Jesse Eisenberg and Kristen Stewart with pot smoke swirling upward, spelling out the title. It was an open invitation for potheads, which seems like the wrong approach. They don’t want to be invited anywhere. They want to discover things for themselves. But an even bigger flub comes in the movie itself. Directed by Nima Nourizadeh, whose Project X (2012) indulged in a gleeful display of sheer excess, American Ultra continues in that tradition. In short, it’s more focused on bloody, gory killings than it is on blazing up. Many scenes focus on blunt objects bashing into skulls, sharp objects slicing into skin, and bullets tearing through bodies (tossing them across the room in the bargain). Blood sprays and gushes and spatters everywhere, getting into the clothing, hair, eyebrows, nostrils, pores, and even teeth of our heroes, where it stays throughout the film, just drying. 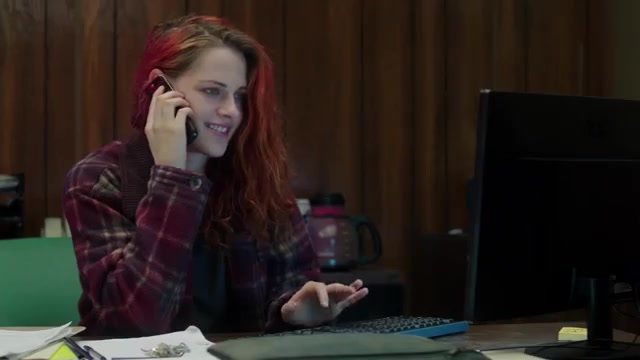 In a certain kind of movie, this approach is totally acceptable. We’re not prudes, after all. But given that Max Landis’ screenplay sets up American Ultra as a comedy, this violence has the effect of squelching the humor. Jokes that once flew are either put on pause for the fighting, or very simply snuffed out by the intensity of the violence. I can only imagine that this might be a huge buzzkill for the potheads who sat down to the movie, hoping for something that might cause deep thought or unfettered giggling.

Eisenberg and Stewart are among the film’s highlights. Eisenberg is one of the best actors in his age group. He frequently plays nervous characters, but he has the ability to turn this nervousness into edginess, and he can play a wide variety of roles; he’s also incapable of being less than totally honest. Paired up with Stewart for the second time since the terrific Adventureland (2009), they have a wonderful, loving chemistry together. Frankly, they’re kinda adorable. Eisenberg plays Mike, who lives in a small West Virginia town and works in a small, little-frequented market. In his off-hours, he loves nothing more than to draw cartoons, smoke pot, and hang out with his beloved Phoebe (Stewart).

He plans a romantic trip to Hawaii for the two of them, during which he hopes to propose marriage. But an anxiety attack, which he apparently gets often, prevents Mike from boarding the plane, and they turn around and head home in defeat. Back at work at the market, two potential car thieves try to jump Mike, but some kind of 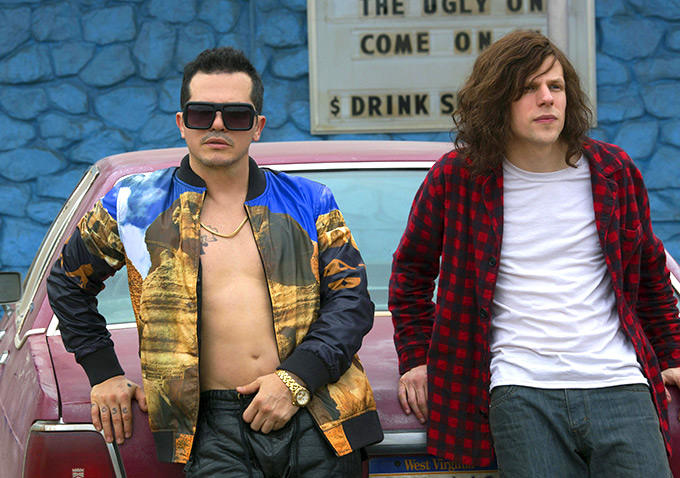 unexpected, long-buried super-agent training kicks in and he’s able to dispatch both thugs in seconds. The CIA takes notice, and the nasty, bullying agent Yates (Topher Grace) launches a full-scale operation — including an armed drone and more than a dozen trained killers (including Walton Goggins as the crazed “Laugher”) — to take Mike down.

Meanwhile, Mike’s former handler, Victoria Lasseter (Connie Britton) tries to help, calling in favors from a former assistant (Tony Hale) back at the office. For his part, Mike can only turn to his drug dealer, known as “Rose” and played, hilariously, by John Leguizamo. He gets some of the biggest laughs in the film, and it’s a shame he’s not around longer. Conversely, Topher Grace is around far too long, screeching and faux-swaggering his way through his thoroughly unpleasant character.

Eventually, it appears as if Nourizadeh is trying to make a cult film, taking pages from things like Kick-Ass or Scott Pilgrim vs. the World, and going as far over-the-top as possible. American Ultra is passably entertaining, and the movie has enough good things to make it worth maybe a future rental or a stream. But there’s a subtle difference between “Whoa!” and “Dude…” that this movie just doesn’t get.