Day Four of the Flick Nation “12 Days of Star Wars” continues with a personal question: when was your first time?

Today is Thursday, December 10 which means there’s exactly 7 days until Star Wars: The Force Awakens hits theaters. I got my ticket the day they went on sale and by this time next week, I’ll be waiting in line with, what I’m guessing, will be a few hundred like minded individuals. As I mentioned in the initial post in our “12 Days of Star Wars” and as Dennis corroborated, this is very well our last big movie “event” and I remain way, way too excited. Seriously. I’m actually alarmed at how excited I am.

The excitement of course has to do with my passion for film in general and my love of the Star Wars franchise but there’s also a major nostalgia game at play here. That’s no secret and Disney/J.J. Abrams have been pretty amazing at hitting all the right nostalgia notes in the limited press material they’ve released. All the familiar faces, the music cues and the state of the art effects mixed with practical ones are all major ingredients involved in this hype machine. But in order to invoke nostalgia, one must have something to be nostalgic about and that got me thinking back to the first time I saw Star Wars: Episode IV- A New Hope. 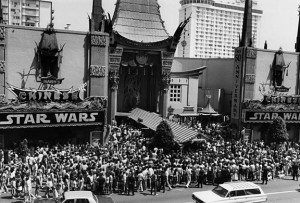 My family and I were living in a crappy little town called Orland, CA and my dad was a dairyman. We had a movie theater in town but it was a weird place that showed a mix of Spanish language films and what would amount today to “second run” movies. In other words, we didn’t really get new films in town and all of my friends had seen Star Wars at the brand new multiplex about an hour away in Chico, CA. I was 5 years old, maybe 6 and already had started collecting the Star Wars toys but I had never seen the movie. Like any smart 5 or 6 year old I lied and said I had seen it but my lies started wearing thin as many friends started seeing it two or three times thus giving them the ability to recall certain scenes. My ruse was nearly up and this caused some pretty serious stress.

Now, events are still a bit hazy and if I were to ask my parents the details about how and when I finally saw Star Wars, I’d get a blank stare. But I do know my dad worked long hours and by 1977, I had two younger sisters. Money was tight and for whatever reason, I had become kind of distant from my dad. I’m sure the stress of a difficult (and ultimately failing) career coupled with 3 little kids and not much money made my dad get pretty quiet and distant but he’s still that way so, I’ll never know. I do know that one night after dinner (and after me probably whining about it non-stop) my dad said “let’s go see Star Wars.” And we did!

As much as I’d like to say it was amazing, I feel the need to be honest with you, Flick Nation. Maybe I’m just making up for lying to my fellow classmates about having seen the film when I hadn’t. But truth be told, I fell asleep. It was late, it was a long drive and the excitement probably wore me out. But I do remember the drive there in my dads truck sitting right beside him as we drove. I remember the way his truck smelled and I especially remember going into this big, bright multiplex. The smell of popcorn and the excitement in the air also occupies a small corner of my brain. Even writing this brings it all back and it’s a wonderful, early memory.

But what doesn’t come back is the way the movie affected me because, as I said, I fell asleep. I’m also not sure when I was able to see it again but my guess is we rented a bootleg VHS (or even Beta-Max!) tape a few years later before The Empire Strikes Back hit theaters. But the important memory from that night was being with my dad and seeing Star Wars. He went out of his way to take his kid an hour away from home, late at night, when he had to probably get up at 4:00 a.m. and milk cows the next day. He took the time to do that and that was awesome. Without lying too far back on the therapists couch, that’s also about the last time I can remember ever doing much with my dad aside from some errant fishing trips when I was a teen. But whatever. I’ll always have Star Wars.

So readers, when was your first time seeing Star Wars?