Day Five of the Flick Nation “12 Days of Star Wars” continues with a look at that snuggly, cuddly genocidal maniac, Darth Vader.

I sometimes like to look at toys when I’m in a big box store. Call it force of habit or flirting with the irresponsibility of buying crap I really don’t need but it’s kind of fun. It’s also a nice peek into the pop culture mood of what kids (and let’s be honest, hella nerdy adults) are into these days when it comes to ancillary movie junk. The major players in the “boys toys” isle seem to be WWE wrestling, whatever new crappy bug/car/robot hybrid is being floated by a toy exec and D.C./Marvel toys, mostly the latter. There’s also oodles of Lego’s.

I’ve recently found it interesting there’s been more super hero toys for “girls” on shelves such as Black Widow and Wasp which is cool given the recent rightful outcry over Marvel leaving Black Widow out of many toy lines. But the thing that’s always got under my skin in the kids toy isle is the way Lucas and now, Disney, has been trying to pawn off Darth Vader toys. It’s just kind of weird, when you think about it for a moment. He’s a stone cold killer, one of the biggest bad guys in cinematic history and right this moment, you can buy an adorable iteration of him to snuggle up with.

Anakin Skywalker was always a snotty, cocky jerk as played by Hayden Christensen in the Star Wars prequels. And hey, that’s cool. It not only ties into Luke’s (Mark Hamill) lesser traits (constant whining, bad acting, general antsyness) but also gives viewers hope he can someday overcome these issues and be a better man. But nope! As we all saw in Star Wars: Episode III: Revenge of the Sith he not only happily murders a big group of Jedi children he also seethes with jealousy and rage at Obi-Wan (as played by Ewan McGregor) who offers to help his mentee out of a lava pit. Young Anakin Skywalker would rather burn alive than let go of anger and accept help. Jeez, them are some deep seated issues. Then he gets put back together as Darth Vader who’s helmet was a blatant riff on the helmets worn by Nazi soldiers.

Cut to Star Wars: Episode IV- A New Hope and Darth is as bad as ever. He chokes out those who won’t listen and he completely destroys Princess Leia’s home planet Alderaan. While we’re never given a full body count Obi-Wan hears “millions of voices silenced” and this link puts their population at 2 BILLION. So, not counting whatever destruction Vader unleashed outside of movies we’ve seen, by the end of Episode Four he’s killed like, 2 billion and 10 people. Men, women and children. Plus, here’s something never talked about: he does the worst thing possible to Princess Leia right in front of her and that’s his own daughter. Think about it; dude chooses the dark side thus abandoning his kids. His daughter gets the better end of the stick when adopted, growing up a princess while Luke’s a Tatooine grease monkey and farmer. Then he captures his own daughter and explodes her adopted home right in front of her. What a diiiiiick. 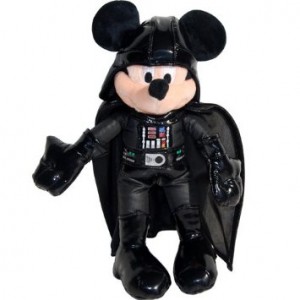 Let’s move on to Star Wars: Episode 5- The Empire Strikes Back where cinematically speaking, he commits the most heinous of crimes when he turns Han Solo over to Jabba the Hut where Solo is then frozen in carbonite. Total snitch move. Then later, when having a battle to the death with Luke he not only reveals that, “why yes, I’m trying to kill you, I’m also your FATHER.” Then he cuts off Luke’s hand. Do you see what I’m getting at? Darth Vader is one evil villain, one of the worst ever in fact. Frankly, his attempt at redemption in Star Wars: Episode VI- Return of the Jedi is too little, too late and has always felt like George Lucas trying to put a bow on the franchise. Sure, he saves Luke and risks his own life doing so but I doubt Leia was like, “Cool, dad. We’re all good now. The billions you blew up on my adopted home planet were all creeps anyway.” Not likely.

So, back we go to the toy isle where Darth Vader is omnipresent as a toy you can buy for your kids. Never is there a disclaimer that says, like, “Caution, this character is sheer evil and not only committed mass genocide but wanted to keep upping the body count before he was stopped. Also: terrible dad.” I guess I’m kind of o.k. with the general representations of him where he’s just a simple action figure that looks looming and dark. But then there’s these stuffed dolls and cuddle pillows. Yes kids, come, lay down with the most evil man in the universe and maybe someday, join him. Sweet dreams!

Look, I know we need some bad guys for kids to play with when they’re playing with toys. And yes, it’s better than, say “Indians” or “Germans” which are real people. But still, why is Darth Vader being integrated into the cuddly, snuggly toy section? It just feels wrong. That is unless you’re grooming your kid to be the next evil warlord. In which case make sure he/she is getting their daily allowance of small animal torture.