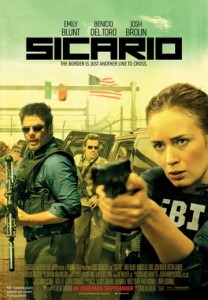 Let’s take just a moment to sing the praises of Roger Deakins, who is surely one of the greatest living cinematographers, and, for that matter, probably one of the greatest of all time. He has shot several movies for the Coen brothers, including Fargo, The Big Lebowski, The Man Who Wasn’t There (in black and white), and No Country for Old Men, as well as Frank Darabont’s The Shawshank Redemption, Tim Robbins’ Dead Man Walking, Martin Scorsese’s Kundun, Andrew Dominik’s The Assassination of Jesse James by the Coward Robert Ford, John Patrick Shanley’s Doubt, and Sam Mendes’ Skyfall, among many others. That’s a list of beautiful films. He has been nominated for twelve Oscars, and has never won. The thirteenth time may be the charm, if the outstanding new movie Sicario has enough momentum to stick in viewers’ minds for the next few months.

Now, none of us, except Deakins and French-Canadian director Denis Villeneuve, will be able to tell where the contribution of one begins and where the other ends, but the most visually striking moments in Sicario are simply observational. A long sequence shows our hero, FBI agent Kate Macer (Emily Blunt), traveling with members of an elite new unit to the Mexican border. That’s it, just traveling. Just watching as the landscape changes, as the traffic thickens, and as something — some, unspeakable sense — just seems to grow more and more sinister. In another scene, Kate and the task force arrive back at their base, and Kate wants to know what’s going on. She confronts Matt Graver (Josh Brolin), the man in charge, and is told… very little. Villeneuve and Deakins film this entire exchange in one long, wide shot, as the men file inside, as Kate approaches Matt, as they speak, and as Kate is left alone; a balance has been shifted, but just exactly how is not yet revealed. 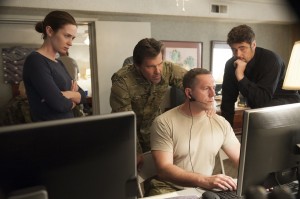 In a memorable sequence of Kate in a briefing, she’s surrounded by all kinds of warriors, ranging from trained soldiers to guys that look like grizzled recreational hunters. Visually, she is the smallest one in the room. In her clever performance, Blunt conveys a sense of dislocation, and perhaps confusion and trepidation, but tries not to let on. Another shot shows dozens of Mexican laborers that have been gathered for questioning. It’s dark, and they are outside, sitting in large pools of light, where another mysterious character, Alejandro (Benicio Del Toro), questions them. Still another shot shows Kate storming through a cramped tunnel; the reddish brown light was probably Deakins’ doing, but Kate’s helmet lamp knocking against the braces in the ceiling, was likely Villeneuve’s.

But what exactly is going on here? Kate is kept in the dark as long as we are, and I’d hate to give anything away, but let’s just say that it’s all a complex manhunt for a powerful Mexican drug lord. As the movie begins, Kate and her partner Reggie (Daniel Kaluuya) raid a house in Arizona. Inside, walled up behind the sheetrock, they find several decomposing corpses. Other, unluckier officers find a boobytrapped explosive in a shed. When her mission is over, Matt appears in her office, meeting with her superior (Victor Garber), and she finds herself recruited for the new task force. She is told that their first stop is Texas, but they unexpectedly arrive in Mexico instead. At the border, the team shoots a few carloads of what look to be shady drug-dealer types, though Kate has no idea how anyone knows that. 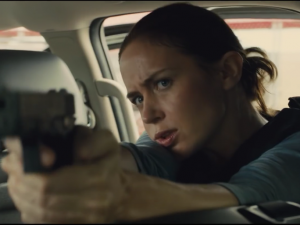 Matt eventually explains to her that, since regular methods have no effect, they are simply rattling cages, beating bushes, to stir things up and see what emerges. This is the truth, but not the entire truth. The entire truth has to do with the Alejandro character, who, I can tell you, is the “sicario” (or hitman) of the title. He’s absolutely fascinating. He shows up to save Kate in one scene, when a night off in a barroom ends up in a struggle to the death. And in other scenes, he appears to be someone not to be trifled with. Del Toro plays him just right, close to the chest, but built on layers of pain and hurt. It’s a hard shell meant to close off what was once open. If you thought Del Toro was amazing in The Usual Suspects, 21 Grams, or Traffic, you ain’t seen nothing yet. (Plus, it goes without saying that this performance tops his role as Pablo Escobar from earlier this year.)

Speaking of Traffic, I worry that Sicario is being advertised to resemble that Oscar-winner, as well as two other Oscar-winners, Syriana and Crash. Let me confess that I am not a fan of any of those movies. I found them all far too preachy and self-important, hell-bent on teaching viewers a lesson and — worse — making them feel like they needed to be taught a lesson. Let me assure you that Sicario is not like that. Whereas the other three pointed angry fingers, Sicario curls a finger back and invites us in; it allows us to find our own way and think for ourselves. 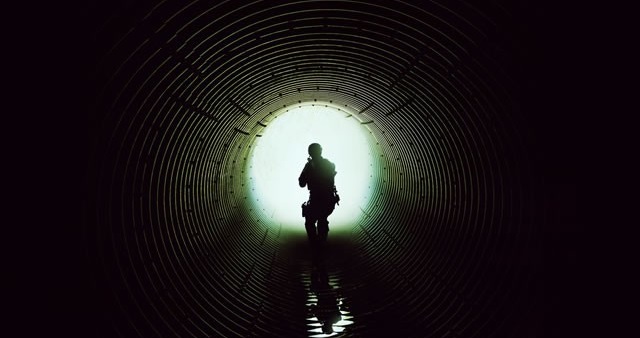 Yet, for me, what put Sicario over the top and elevated it to a great movie was a handful of scenes showing a Mexican cop at home. He wakes up. His son asks him to play soccer. He eats breakfast. He pours a little liquor in his coffee. In other words, he’s living a life. We have no idea who he is and how he connects to the rest of the plot — yet. But these are the kinds of scenes that an ordinary, lesser movie would have left on the cutting room floor (or perhaps never even conceived of). Yet when the revealing moment comes, we can see how it might have been an ordinary movie moment, and now, given what we know, it’s an extraordinary one.

Director Villeneuve has told stories like this before, but his Oscar-nominated Incendies (2010) and his U.S. debut Prisoners (2013) both eventually reached and passed breaking points, after long, promising starts. Sicario does not; it sustains its grip from start to finish. It may be just another thriller (and it is thrilling) about the drug business and the good guys trying to stop it, and it doesn’t really have much to add to the discussion, but the way it joins the discussion is most refreshing. It’s a pessimistic movie, but so wise and clever that its cynicism is elating.